Fatal insomnia is a rare disorder that results in trouble sleeping.[2] It typically start out gradually and worsen over time.[3] Other symptoms may include mental health problems, poor coordination, weight loss, and excessive sweating.[1] When people who are affected sleep they often have vivid dreams.[3] Death generally occurs in 6 to 36 months from the onset of symptoms.[1]

Fatal insomnia is a prion disease of the brain.[2] It is usually caused by a mutation to the protein PrPC.[2] The mutation is typically inherited from a parent in an autosomal dominant fashion, though may rarely occur as a new mutation.[1] The form due to an underlying mutation is known as fatal familial insomnia (FFI), though the disease may also occur randomly, known as sporadic fatal insomnia (sFI).[3] Diagnosis is based on a sleep study, PET scan, and genetic testing.[1]

Fatal insomnia has no known cure, with efforts directed at improving a person's symptoms.[1][3] Fatal insomnia is rare.[3] Males and females are affected equally frequently.[3] Onset is typically between the ages of 40 and 60.[1] The first recorded case was an Italian man, who died in Venice in 1765.[4]

The disease has four stages:[5]

Other symptoms include profuse sweating, pinpoint pupils, the sudden entrance into menopause for women and impotence for men, neck stiffness, and elevation of blood pressure and heart rate. Constipation is common as well. As the disease progresses, the person becomes stuck in a state of pre-sleep limbo, or hypnagogia, which is the state just before sleep in healthy individuals. During these stages, people commonly and repeatedly move their limbs as if dreaming.[6]

The age of onset is variable, ranging from 18 to 60 years, with an average of 50.[7] The disease can be detected prior to onset by genetic testing.[8] Death usually occurs between 7–36 months from onset. The presentation of the disease varies considerably from person to person, even among people within the same family. 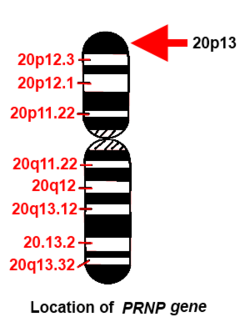 The gene PRNP that provides instructions for making the prion protein PrPC is located on the short (p) arm of chromosome 20 at position p13.[9] Both people with FFI and those with familial Creutzfeldt–Jakob disease (fCJD) carry a mutation at codon 178 of the prion protein gene. FFI is also invariably linked to the presence of the methionine codon at position 129 of the mutant allele, whereas fCJD is linked to the presence of the valine codon at that position. "The disease is where there is a change of amino acid at position 178 when an asparagine (N) is found instead of the normal aspartic acid (D). This has to be accompanied with a methionine at position 129."[10]

In itself, the presence of prions causes reduced glucose use by the thalamus and a mild hypo-metabolism of the cingulate cortex. The extent of this symptom varies between two variations of the disease, these being those presenting methionine homozygotes at codon 129 and methionine/valine heterozygotes being the most severe in the later one.[11] Given the relationship between the involvement of the thalamus in regulating sleep and alertness, a causal relationship can be drawn, and is often mentioned as the cause.

Diagnosis is suspected based on symptoms.[1] Further work up often include a sleep study and PET scan.[1] Confirmation of the familial form is by genetic testing.[1]

Other diseases involving the mammalian prion protein are known.[12] Some are transmissible (TSEs, including FFI) such as kuru, bovine spongiform encephalopathy (BSE, also known as "mad cow disease") in cattle, and chronic wasting disease in American deer and American elk in some areas of the United States and Canada, as well as Creutzfeldt–Jakob disease (CJD). Until recently, prion diseases were only thought to be transmissible by direct contact with infected tissue, such as from eating infected tissue, transfusion, or transplantation; research suggests that prions can be transmitted by aerosols, but that the general public is not at risk of airborne infection.[13]

Treatment involves supportive care.[2] Sleeping pills, including barbiturates, have not been found to be helpful; on the contrary, they have been suggested to worsen the symptoms.[14][disputed – discuss]

Similar to other prion diseases, the disease is invariably fatal.[15][2] Life expectancy ranges from seven months to six years,[2] with an average of 18 months.[15] 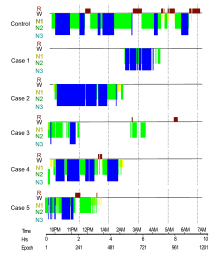 In 1998, 40 families were known to carry the gene for FFI globally: eight German, five Italian, four American, two French, two Australian, two British, one Japanese, and one Austrian.[16] In the Basque Country, Spain, 16 family cases of the 178N mutation were seen between 1993 and 2005 related to two families with a common ancestor in the 18th century.[17] In 2011, another family was added to the list when researchers found the first man in the Netherlands with FFI. While he had lived in the Netherlands for 19 years, he was of Egyptian descent.[18] Other prion diseases are similar to FFI and could be related, but are missing the D178N gene mutation.[6]

As of 2016, 24 cases of sporadic fatal insomnia have been diagnosed.[1] Unlike in FFI, sFI sufferers do not have the D178N mutation in the PRNP-prion gene; they all have a different mutation in the same gene causing methionine homozygosity at codon 129.[19][20]

In late 1983, Italian neurologist Ignazio Roiter received a patient at the University of Bologna hospital's sleep institute. The man, known only as Silvano, decided in a rare moment of consciousness to be recorded for future studies and to donate his brain for research in hopes of finding a cure for future victims.[21]

One person was able to exceed the average survival time by nearly one year with various strategies, including vitamin therapy and meditation, using different stimulants and hypnotics, and even complete sensory deprivation in an attempt to induce sleep at night and increase alertness during the day. He managed to write a book and drive hundreds of miles in this time, but nonetheless, over the course of his trials, the person succumbed to the classic four-stage progression of the illness.[22][21] 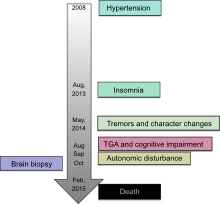 In 2011, the first reported case in the Netherlands was of a 57 year-old man of Egyptian descent. The man came in with symptoms of double vision and progressive memory loss, and his family also noted he had recently become disoriented, paranoid, and confused. While he tended to fall asleep during random daily activities, he experienced vivid dreams and random muscular jerks during normal slow-wave sleep. After four months of these symptoms, he began to have convulsions in his hands, trunk, and lower limbs while awake. The person died at age 58, seven months after the onset of symptoms. An autopsy revealed mild atrophy of the frontal cortex and moderate atrophy of the thalamus. The latter is one of the most common signs of FFI.[18]

Still with unclear benefit in humans, a number of treatments have had tentative success in slowing disease progression in animal models, including pentosan polysulfate, mepacrine, and amphotericin B.[1] As of 2016[update], a study investigating doxycycline is being carried out.[1][26]

In 2009, a mouse model was made for FFI. These mice expressed a humanized version of the PrP protein that also contains the D178N FFI mutation.[27] These mice appear to have progressively fewer and shorter periods of uninterrupted sleep, damage in the thalamus, and early deaths, similar to humans with FFI.

The Prion Alliance was established by husband and wife duo Eric Minikel and Sonia Vallabh after Vallabh was diagnosed with the fatal disease.[28] They conduct research at the Broad Institute to develop therapeutics for human prion diseases. Other research interests involve identifying biomarkers to track the progression of prion disease in living people.[29][30]