Fat embolism syndrome occurs when fat enters the blood stream (fat embolism) and results in symptoms.[1] Symptoms generally begin within a day.[1] This may include a petechial rash, decreased level of consciousness, and shortness of breath.[1] Other symptoms may include fever and decreased urine output.[2] The risk of death is about 10%.[2]

Fat embolism most commonly occurs as a result of fractures of bones such as the femur or pelvis.[3][1] Other potential causes include pancreatitis, orthopedic surgery, bone marrow transplant, and liposuction.[3][2] The underlying mechanism involved widespread inflammation.[3] Diagnosis is based on symptoms.[2]

Treatment is mostly supportive care.[4] This may involve oxygen therapy, intravenous fluids, albumin, and mechanical ventilation.[2] While small amounts of fat commonly occur in the blood after a bone fracture,[3] fat embolism syndrome is rare.[4] The condition was first diagnosed in 1862 by Zenker.[1]

Symptoms of fat embolism syndrome (FES) can start from 12 hours to 3 days after diagnosis of the underlying clinical disease. The three most characteristic features are: respiratory distress, neurological features, and skin petechiae.[5] Respiratory distress (present in 75% of the cases) can vary from mild distress which requires supplemental oxygen to severe distress which requires mechanical ventilation. For neurologic features, those who have FES may become lethargic, restless, with a drop in glasgow coma scale (GCS) due to cerebral oedema rather than cerebral ischaemia. Therefore, neurological signs are not lateralised to one side of the body. In the severe form of cerebral odema, a person may become unresponsive. Petechiae rash usually happens in 50% of the patients. Such skin manifestation is temporary and can disappear within one day.[6] The fat embolism syndrome can be divided into three types:[5]

Orthopaedic injuries especially fractures of the long bones are the most common cause of fat embolism syndrome (FES). The rates of fat embolism in long bone fractures varies from 1% to 30%. The mortality rate of fat-embolism syndrome is approximately 10–20%.[7] However, fat globules have been detected in 67% of those with orthopaedic trauma and can reach as high as 95% if the blood is sampled near the fracture site. As the early operative fixation of long bone fractures become a common practice, the incidence of FES has been reduced to between 0.9% and 11%.[6]

Other rare causes of fat embolism syndrome are:[7][6]

Once fat particles enter the blood circulation, it can lodge at various sites of the body, most commonly in the lungs (up to 75% of the cases). However, it can also enter the brain, skin, eyes, kidneys, liver, and heart circulation, causing capillary damage, and subsequently organ damage in these areas. There are two theories that describe the formation of a fat embolus:[6] 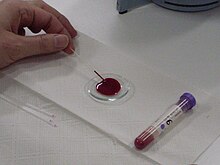 Fat embolism is presence of fat particles in the micro-circulation of the body. Meanwhile, fat embolism syndrome is the clinical manifestation as the result of fat particles lodging in the body micro-circulation.[6] There are three major diagnostic criteria proposed for fat embolism syndrome, however, none of them are validated and accepted universally.[6] However, Gurd and Wilson's criteria for fat embolism become more commonly used when compared to the other two diagnostic criteria.[8]

A least two positive major criteria plus one minor criteria or four positive minor criteria are suggestive of fat embolism syndrome.[6] Fat embolism syndrome is a clinical diagnosis. There are no laboratory tests sensitive or specific enough to diagnose FES. Such laboratory tests are only used to support the clinical diagnosis only.[7] Chest X-ray may show diffuse interstitial infiltrates while chest CT scan will show diffuse vascular congestion and pulmonary oedema. Bronchoalveolar lavage has been proposed to look for fat droplets in alveolar macrophages however it is time consuming and is not specific to fat embolism syndrome. Looking for fat globules in sputum and urine is also not specific enough to diagnose FES.[6]

For those treated conservatively with immobilisation of long bone fractures, the incidence of FES is 22%. Early operative fixation of long bone fractures can reduce the incidence of FES especially with the usage of internal fixation devices. Patients undergoing urgent fixation of long bone fractures has a rate of 7% of acute respiratory distress syndrome (ARDS) when compared to those undergoing fixation after 24 hours (39% with ARDS). However, movement of the fracture ends of the long bones during the operative fixation can cause transient increase of fat emboli in the blood circulation. Cytokines are persistently elevated if the long bone fractures is treated conservatively using immobilisation. The cytokine levels would return to normal after operative fixation. Although ream nailing increases pressure in the medullary cavity of the long bones, it does not increase the rates of FES. Other methods such as drilling of holes in the bony cortex, lavaging bone marrow prior to fixation, and the use of tourniquets to prevent embolisation have not been shown to reduce the rates of FES.[6]

Corticosteroid therapy such as methylprednisolone (6 to 90 mg/kg) has been proposed for the treatment of FES, however, it is controversial. Corticosteroid can be used to limit free fatty acid levels, stabilising membranes, and inhibit leukocyte aggregation. A meta-analysis conducted in 2009 reported prophylactic corticosteroids can reduce the risk of FES by 77%. However, there is no difference in mortality, infection, and avascular necrosis when compared to the control group. However, a randomised trial conducted in 2004 reported no differences in FES incidence when comparing treatment with the control group.[6] Administration of corticosteroids for 2 to 3 days is not associated with increased rates of infection.[5] However, there is insufficient data to support the use of methyprednisolone once FES is established.[5]

Heparin has been used in the prevention of venous thrombosis in post-operative patients; however its regular use in those with FES has been contraindicated due to increase risk of bleeding in those suffering from polytrauma.[5] Placement of inferior vena cava filters has been proposed to reduce the amount of emboli going into the lung vascular system, however, this method has not been studied in detail.[6]

Once FES develops, the person should be admitted into intensive care unit (ICU), preferably with central venous pressure (CVP) monitoring. CVP monitoring would be helpful to guide the volume resuscitation.[5] Supportive treatment is the only proven treatment method. Supplemental oxygen can be given if a person has mild respiratory distress.[6] However, if a person has severe respiratory distress, either continuous positive pressure ventilation (CPAP), or mechanical ventilation using positive end-expiratory pressure (PEEP)[5] may be indicated. Fluid replacement is required to prevent shock.[6] Volume resuscitation with human albumin is recommended because it can restore blood volume in the circulatory system while also binds to free fatty acids in order to reduce lung injuries.[5][8] In severe cases, dobutamine should be used to support the right ventricular failure. Frequent Glasgow coma scale (GCS) charting is required to assess the neurological progression of a person with FES. A placement of intracranial pressure monitor may be helpful to direct the treatment of cerebral odema.[6]

In 1861, Zenker first reported on the autopsy findings of fat droplets found in the lungs of a railway worker who died due to severe thoraco-abdominal crush injury. In 1873, Bergmann diagnosed fat embolism clinically in a patient with fractured femur. In 1970, Gurd defined the characteristics of this phenomenon.[7] Gurd later modified the fat embolism criteria together with Wilson, thus producing Gurd and Wilson's criteria for fat embolism syndrome in 1974.[7] In 1983, Schonfeld suggested a scoring system for the diagnosis of fat embolism syndrome. In 1987, Lindeque proposed another scoring system that diagnose fat embolism syndrome by using respiratory changes alone. However, none of them become universally accepted in the medical community.[6]