From WikiProjectMed
Jump to navigation Jump to search
"Proptosis" redirects here. For the condition of drooping of the eyelid, see Ptosis (eyelid).
This article is about proptosis. For the weevils, see Exophthalmus.

Exophthalmos (also called exophthalmus, exophthalmia, proptosis, or exorbitism) is a bulging of the eye anteriorly out of the orbit. Exophthalmos can be either bilateral (as is often seen in Graves' disease) or unilateral (as is often seen in an orbital tumor). Complete or partial dislocation from the orbit is also possible from trauma or swelling of surrounding tissue resulting from trauma.

In the case of Graves' disease, the displacement of the eye results from abnormal connective tissue deposition in the orbit and extraocular muscles, which can be visualized by CT or MRI.[1]

If left untreated, exophthalmos can cause the eyelids to fail to close during sleep, leading to corneal dryness and damage. Another possible complication is a form of redness or irritation called superior limbic keratoconjunctivitis, in which the area above the cornea becomes inflamed as a result of increased friction when blinking. The process that is causing the displacement of the eye may also compress the optic nerve or ophthalmic artery, lead to blindness.

The clinical presentation for exophthalmos is consistent with:[2] 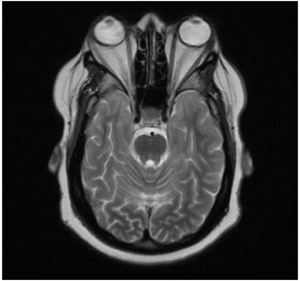 Bilateral exophthalmos as seen on MRI.

Measurement of the degree of exophthalmos is performed using an exophthalmometer.

Most sources define exophthalmos/proptosis as a protrusion of the globe greater than 18 mm.[1]

The term exophthalmos is often used when describing proptosis associated with Graves' disease.[5] 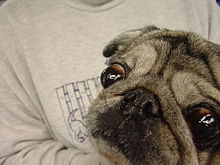 Exophthalmos in a Pug

Exophthalmos is commonly found in dogs. It is seen in brachycephalic (short-nosed) dog breeds because of the shallow orbit. It can lead to keratitis secondary to exposure of the cornea. Exophthalmos is commonly seen in the pug, Boston terrier, Pekingese, and shih tzu. It is a common result of head trauma and pressure exerted on the front of the neck too hard in dogs. In cats, eye proptosis is uncommon and is often accompanied by facial fractures.[6]

About 40% of proptosed eyes retain vision after being replaced in the orbit, but in cats very few retain vision.[7] Replacement of the eye requires general anesthesia. The eyelids are pulled outward, and the eye is gently pushed back into place. The eyelids are sewn together in a procedure known as tarsorrhaphy for about five days to keep the eye in place.[8] Replaced eyes have a higher rate of keratoconjunctivitis sicca and keratitis and often require lifelong treatment. If the damage is severe, the eye is removed in a relatively simple surgery known as enucleation of the eye.

The prognosis for a replaced eye is determined by the extent of damage to the cornea and sclera, the presence or absence of a pupillary light reflex, and the presence of ruptured rectus muscles. The rectus muscles normally help hold the eye in place and direct eye movement. Rupture of more than two rectus muscles usually requires the eye to be removed, because significant blood vessel and nerve damage also usually occurs.[8] Compared to brachycephalic breeds, dochilocephalic (long-nosed) breeds usually have more trauma to the eye and its surrounding structures, so the prognosis is worse.[9]