Etonogestrel birth control implant, sold under the brand name Nexplanon among others, is a device made up of a single rod containing etonogestrel which is used for birth control.[5] It is one of the most effective forms of birth control with a one-year failure rate around 0.05%.[6] It lasts at least three or four years with some data showing effectiveness for five years.[2][4][7][8] The device is placed under the skin.[2] Following removal fertility quickly returns.[5]

Common side effects include menstrual changes including irregular bleeding, with approximately one third of women reporting no menstrual periods.[5][9][10] It is not recommended in people with liver disease.[10] The etonogestrel implant is a type of long-acting reversible birth control.[6] It works by stopping ovulation, thickening the mucus around the opening of the cervix, and altering the lining of the uterus.[11]

Etonogestrel implants were approved for medical use in Indonesia in 1998 and in the United States in 2006.[9][12] It is on the World Health Organization's List of Essential Medicines.[13] It is available as a generic medication.[14] The wholesale cost in the developing world is about 8.93 to 13.29 USD.[15] In the United Kingdom the device costs the NHS about 83.43 pounds.[14] The cost in the United States is about 625.00 USD.[6] Etonogestrel implants are approved in more than 90 countries and used by about three million women globally as of 2010.[11][12]

Etonogestrel birth control implants are a type of long-acting reversible contraception, which has been shown to be one of the most effective form of birth control.[16] The failure rate of the implants is 0.05% for both perfect use and typical use because the method requires no user action after placement.[17] Studies of one type, which include over 2,467 women-years of exposure, found no pregnancies.[18][19][20]

Other studies have found some failures with this method, some attributed to failures of the method itself and others to improper placement, drug interactions, or conception prior to method insertion.[21]

Irregular bleeding and spotting: Many women will experience some type of irregular, unpredictable, prolonged, frequent, or infrequent bleeding.[22] Some women also experience amenorrhea. For some women, prolonged bleeding will decline after the first three months of use. However, other women may experience this bleeding pattern through all five years of use. While these patterns are not dangerous, they are the most common reason that women give for discontinuing the use of the implant. After removal, bleeding patterns return to previous patterns in most women.[18][19][20]

Insertion complications: Some minor side effects such as bruising, skin irritation, or pain around the insertion site are common.[18] However, there are some rare complications that can occur, such as infection or expulsion.[18][23] In some cases, a serious complication occurs when the provider fails to insert, and the rod is left in the inserter. An Australian study reported 84 pregnancies as a result of such failure.[21]

Migration: Although very rare, the rod can sometimes move slightly within the arm. This can make removal more difficult. It is possible that insertion in the same site as a previous implant increases the likelihood of migration.[23] Rods can be located only through high-frequency ultrasound or magnetic resonance imaging (MRI).[18] It can be located using traditional X-ray or CT-scan because of the inclusion of barium sulphate. There have been rare reports of implants having reached the lung via the pulmonary artery.[24] Correct subdermal insertion reduces the risk of these events.

Possible weight gain: Some women may experience slight weight gain when using the implant.[18] However, current studies are not conclusive because they do not compare the weight of women using implants with a control group of women not using the implant. The average increase in body weight in studies was less than 5 pounds (2,25 kg) over 2 years.[19]

Ovarian cysts: A small portion of women using implants and other contraceptive implants develop ovarian cysts.[18] Usually these cysts will disappear without treatment.[25]

Pregnancy: it is recommended that implants be removed if a pregnancy does occur. However, there is no evidence to suggest that the implant has a negative effect on pregnancy or a developing fetus.[18]

Acne: Acne has been self-reported to be a side effect, and is listed as a side effect by the FDA. However, a study of users found that a majority of users with acne before their insertion reported that their acne had decreased, and only 16% of those who did not have acne before insertion developed acne.[19]

Other possible symptoms: Other symptoms that have been reported in trials of implants include headache, emotional lability, abdominal pain, loss of libido, and vaginal dryness.[18] However, there have been no studies that conclusively determine that these symptoms are caused by the implant.[19][20]

Women should not use implants if they:[27] 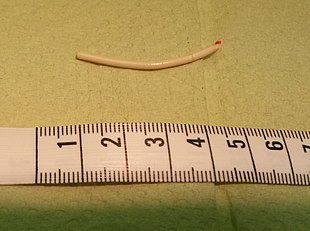 Nexplanon/Implanon consists of a single rod made of ethylene vinylacetate copolymer that is 4 cm long and 2mm in diameter.[22] It is similar to a matchstick in size. The rod contains 68 mg of etonogestrel (sometimes called 3-keto-destrogestrel), a type of progestin.[18] Peak serum etonogestrel concentrations have been found to reach 781–894 pg/mL in the first few weeks, gradually decreasing to 192–261 pg/mL after 1 year, 154–194 pg/mL after 2 years, and 156–177 pg/mL after 3 years, maintaining ovulation suppression and contraceptive efficacy.[28] Serum levels maintain relatively stable through 36 months, which implies that the method may be effective for longer than 3 years.[29]

Although not formally approved by the manufacturer for more than 3 years, studies have shown it remains a highly effective contraceptive for 5 years.[7]

It is a type of progestogen-only contraception.

An experienced clinician must perform the insertion of implants to ensure proper insertion and minimize the risk of nerve damage or misplacement, which could result in pregnancy.[30] Before insertion, the arm is washed with a cleaning solution and a local anesthetic is applied to the upper arm around the insertion area.[18] A needle-like applicator is used to insert the rod under the skin into the subdermal tissue on the inner side of the arm between the biceps and triceps muscles.[18] The average time for insertion is 0.5 to 1 minute.[19][20] A bandage should be kept on the insertion site for 24 hours afterwards. Bruising and mild discomfort are common after insertion.[18] Serious insertion site complications such as infection can occur very rarely, in less than 1% of patients. If a woman receives an implant outside the first five days of her period, she should wait to have sex or use a backup method of contraception (such as a condom, female condom, diaphragm, sponge, or emergency contraception) for the following week after insertion to prevent pregnancy. However, if the implant is inserted during the first five days of a woman's period, she is protected for that cycle and beyond.[31]

Implants can be removed at any time if pregnancy is desired. The rod must also be removed by an experienced clinician. At removal, a local anesthetic is again used around the implant area at the distal end.[18] If the provider cannot feel the implant, imaging tests may be necessary to locate the rod before it can be removed. A small incision is made in the skin over the end of the implant site. In some cases, a fibrous sheath may have formed around the implant, in which case the sheath must be incised.[18] The implant is removed using forceps. The removal procedure lasts, on average, 3 to 3.5 minutes.[19][20]

Within a week of removal, the hormones from the device leave the body and etonogestrel is undetectable in most users.[18] Most women will begin to ovulate within six weeks of removal.[29][32] Fertility levels will return to what they were before implant insertion.[5]

The mechanism of action of progestin only contraceptives depends on the progestin activity and dose.[33] Intermediate dose progestin-only contraceptives, like Nexplanon or Implanon (and the progestin-only pill Cerazette) allow some follicular development but inhibit ovulation in almost all cycles as the primary mechanism of action. Ovulation was not observed in studies of Implanon in the first two years of use and only rarely in the third year with no pregnancies. A secondary mechanism of action is the progestogenic increase in cervical mucus viscosity which inhibits sperm penetration.[34] Hormonal contraceptives also have effects on the endometrium that theoretically could affect implantation, however no scientific evidence indicates that prevention of implantation actually results from their use.[35]

The possibility of the subdermal contraceptive implant began when silicone was discovered in the 1940s and found to be bio-compatible with the human body.[36] In 1964, Folkman and Long published the first study demonstrating that such a rod could be used to deliver drugs.[37] In 1966 Dziuk and Cook published a study that looked at release rates and suggested that the rods could be well suited for contraception.[38] After a study that used implants with progestogens for contraception, the Population Council developed and patented Norplant and Jadelle.[39] Norplant has six rods and is considered a first-generation implant. Jadelle (Norplant II), a two-rod implant, and other single rod implants that followed, were developed because of complications resulting from Norplant's 6-rod system. The Jadelle system contains two silicone rods mixed with levonorgestrel. In 1990 De Nijs patented a co-axial extrusion technique of ethylene vinylacetate copolymers and 3-keto-desogestrel (etonogestrel) for the preparation of long-acting contraceptive devices, such as Implanon, Nexplanon and Nuvaring.[40] The single rods were less visible under the skin and used etonogestrel as opposed to levonorgestrel in the hopes that it would reduce side effects.[36]