Dysentery is a type of gastroenteritis that results in diarrhea with blood.[1][7] Other symptoms may include fever, abdominal pain, and a feeling of incomplete defecation.[2][8][5] Complications may include dehydration.[3]

The cause of dysentery is usually the bacteria Shigella, in which case it is known as shigellosis, or the amoeba Entamoeba histolytica.[1] Other causes may include certain chemicals, other bacteria, other protozoa, or parasitic worms.[2] It may spread between people.[4] Risk factors include contamination of food and water with feces due to poor sanitation.[5] The underlying mechanism involves inflammation of the intestine, especially of the colon.[2]

Efforts to prevent dysentery include hand washing and food safety measures while traveling in areas of high risk.[4] While the condition generally resolves on its own within a week, drinking sufficient fluids such as oral rehydration solution is important.[4] Antibiotics such as azithromycin may be used to treat cases associated with travelling in the developing world.[8] While medications used to decrease diarrhea such as loperamide are not recommended on their own, they may be used together with antibiotics.[8][4]

Shigella results in about 165 million cases of diarrhea and 1.1 million deaths a year with nearly all cases in the developing world.[6] In areas with poor sanitation nearly half of cases of diarrhea are due to Entamoeba histolytica.[5] Entamoeba histolytica affects millions of people and results in greater than 55,000 deaths a year.[9] It commonly occurs in less developed areas of Central and South America, Africa, and Asia.[9] Dysentery has been described at least since the time of Hippocrates.[10]

The most common form of dysentery is bacillary dysentery, which is typically a mild sickness, causing symptoms normally consisting of mild gut pains and frequent passage of stool or diarrhea. Symptoms normally present themselves after 1–3 days, and are usually no longer present after a week. The frequency of urges to defecate, the large volume of liquid feces ejected, and the presence of blood, mucus, or pus depends on the pathogen causing the disease. Temporary lactose intolerance can occur, as well. In some caustic occasions, severe abdominal cramps, fever, shock, and delirium can all be symptoms.[2][11][12][13]

In extreme cases, people may pass more than one liter of fluid per hour. More often, individuals will complain of diarrhea with blood, accompanied by abdominal pain, rectal pain and a low-grade fever. Rapid weight loss and muscle aches sometimes also accompany dysentery, while nausea and vomiting are rare. On rare occasions, the amoebic parasite will invade the body through the bloodstream and spread beyond the intestines. In such cases, it may more seriously infect other organs such as the brain, lungs, and most commonly the liver.[14] 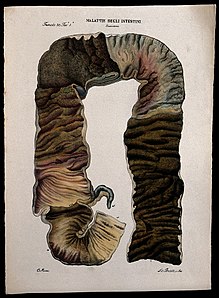 Dysentery results from bacterial, or parasitic infections. Viruses do not generally cause the disease.[7] These pathogens typically reach the large intestine after entering orally, through ingestion of contaminated food or water, oral contact with contaminated objects or hands, and so on. Each specific pathogen has its own mechanism or pathogenesis, but in general, the result is damage to the intestinal linings, leading to the inflammatory immune responses. This can cause elevated physical temperature, painful spasms of the intestinal muscles (cramping), swelling due to fluid leaking from capillaries of the intestine (edema) and further tissue damage by the body's immune cells and the chemicals, called cytokines, which are released to fight the infection. The result can be impaired nutrient absorption, excessive water and mineral loss through the stools due to breakdown of the control mechanisms in the intestinal tissue that normally remove water from the stools, and in severe cases, the entry of pathogenic organisms into the bloodstream. Anemia may also arise due to the blood loss through diarrhea.[citation needed]

Bacterial infections that cause bloody diarrhea are typically classified as being either invasive or toxogenic. Invasive species cause damage directly by invading into the mucosa. The toxogenic species do not invade, but cause cellular damage by secreting toxins, resulting in bloody diarrhea. This is also in contrast to toxins that cause watery diarrhea, which usually do not cause cellular damage, but rather they take over cellular machinery for a portion of life of the cell.[15]

Some microorganisms – for example, bacteria of the genus Shigella – secrete substances known as cytotoxins, which kill and damage intestinal tissue on contact. Shigella is thought to cause bleeding due to invasion rather than toxin, because even non-toxogenic strains can cause dysentery, but E. coli with shiga-like toxins do not invade the intestinal mucosa, and are therefore toxin dependent.

Definitions of dysentery can vary by region and by medical specialty. The U. S. Centers for Disease Control and Prevention (CDC) limits its definition to "diarrhea with visible blood".[16] Others define the term more broadly.[17] These differences in definition must be taken into account when defining mechanisms. For example, using the CDC definition requires that intestinal tissue be so severely damaged that blood vessels have ruptured, allowing visible quantities of blood to be lost with defecation. Other definitions require less specific damage.

Amoebiasis, also known as amoebic dysentery, is caused by an infection from the amoeba Entamoeba histolytica,[18] which is found mainly in tropical areas.[19] Proper treatment of the underlying infection of amoebic dysentery is important; insufficiently treated amoebiasis can lie dormant for years and subsequently lead to severe, potentially fatal, complications.

When amoebae inside the bowel of an infected person are ready to leave the body, they group together and form a shell that surrounds and protects them. This group of amoebae is known as a cyst, which is then passed out of the person's body in the feces and can survive outside the body. If hygiene standards are poor – for example, if the person does not dispose of the feces hygienically – then it can contaminate the surroundings, such as nearby food and water. If another person then eats or drinks food or water that has been contaminated with feces containing the cyst, that person will also become infected with the amoebae. Amoebic dysentery is particularly common in parts of the world where human feces are used as fertilizer. After entering the person's body through the mouth, the cyst travels down into the stomach. The amoebae inside the cyst are protected from the stomach's digestive acid. From the stomach, the cyst travels to the intestines, where it breaks open and releases the amoebae, causing the infection. The amoebae can burrow into the walls of the intestines and cause small abscesses and ulcers to form. The cycle then begins again.[citation needed]

Dysentery may also be caused by shigellosis, an infection by bacteria of the genus Shigella, and is then known as bacillary dysentery (or Marlow syndrome). The term bacillary dysentery etymologically might seem to refer to any dysentery caused by any bacilliform bacteria, but its meaning is restricted by convention to Shigella dysentery.

A diagnosis may be made by taking a history and doing a brief examination. Dysentery should not be confused with hematochezia, which is the passage of fresh blood through the anus, usually in or with stools.

The mouth, skin, and lips may appear dry due to dehydration. Lower abdominal tenderness may also be present.[14]

Cultures of stool samples are examined to identify the organism causing dysentery. Usually, several samples must be obtained due to the number of amoebae, which changes daily.[14] Blood tests can be used to measure abnormalities in the levels of essential minerals and salts.[14]

Efforts to prevent dysentery include hand washing and food safety measures while traveling in areas of high risk.[4]

Although there is currently no vaccine which protects against Shigella infection, several are in development.[20][21] Vaccination may eventually become a part of the strategy to reduce the incidence and severity of diarrhea, particularly among children in low-resource settings. For example, Shigella is a longstanding World Health Organization (WHO) target for vaccine development, and sharp declines in age-specific diarrhea/dysentery attack rates for this pathogen indicate that natural immunity does develop following exposure; thus, vaccination to prevent this disease should be feasible. The development of vaccines against these types of infection has been hampered by technical constraints, insufficient support for coordination, and a lack of market forces for research and development. Most vaccine development efforts are taking place in the public sector or as research programs within biotechnology companies.[citation needed]

Dysentery is managed by maintaining fluids using oral rehydration therapy. If this treatment cannot be adequately maintained due to vomiting or the profuseness of diarrhea, hospital admission may be required for intravenous fluid replacement. In ideal situations, no antimicrobial therapy should be administered until microbiological microscopy and culture studies have established the specific infection involved. When laboratory services are not available, it may be necessary to administer a combination of drugs, including an amoebicidal drug to kill the parasite, and an antibiotic to treat any associated bacterial infection.

If shigellosis is suspected and it is not too severe, letting it run its course may be reasonable — usually less than a week. If the case is severe, antibiotics such as ciprofloxacin or TMP-SMX may be useful. However, many strains of Shigella are becoming resistant to common antibiotics, and effective medications are often in short supply in developing countries. If necessary, a doctor may have to reserve antibiotics for those at highest risk for death, including young children, people over 50, and anyone suffering from dehydration or malnutrition.

Amoebic dysentery is often treated with two antimicrobial drugs such as metronidazole and paromomycin or iodoquinol.[22]

With correct treatment, most cases of amoebic and bacterial dysentery subside within 10 days, and most individuals achieve a full recovery within two to four weeks after beginning proper treatment. If the disease is left untreated, the prognosis varies with the immune status of the individual patient and the severity of disease. Extreme dehydration can delay recovery and significantly raises the risk for serious complications.[23]

The seed, leaves, and bark of the kapok tree have been used in traditional medicine by indigenous peoples of the rainforest regions in the Americas, west-central Africa, and Southeast Asia in this disease.[25][26][27] Bacillus subtilis was marketed throughout America and Europe from 1946 as an immunostimulatory aid in the treatment of gut and urinary tract diseases such as rotavirus and Shigella,[28] but declined in popularity after the introduction of consumer antibiotics. 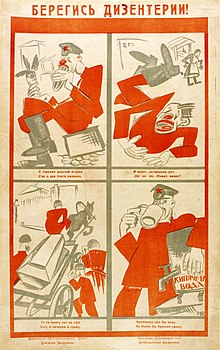 A Red Army soldier dies of dysentery after eating unwashed vegetables. This is a common way of contracting dysentery. From a health advisory pamphlet given to soldiers.