Doxapram, sold under the brand name Dopram among others, is a medication used to treat respiratory depression after surgery or acute respiratory failure.[1] It is not; however, a preferred treatment.[2] It is given by injection into a vein.[1] Effects generally occur around 30 seconds and last for around 10 minutes.[2]

Common side effects include cough, shortness of breath, headache, dizziness, high blood pressure, flushing, sweating, vomiting, and muscle spasms.[2] Other side effects may include QT prolongation, seizure, and red blood cell breakdown.[2] While there is no evidence of harm in pregnancy, the manufacturer does not recommend.[1] It is a respiratory stimulant.[1]

Doxapram is used in intensive care settings to stimulate the respiratory rate in patients with respiratory failure. It may be useful for treating respiratory depression in patients who have taken excessive doses of drugs such as buprenorphine or fentanyl analogues which may fail to respond adequately to treatment with naloxone.[4]

It is equally as effective as pethidine in suppressing shivering after surgery.[5]

Side effects include high blood pressure, panic attacks, rapid heart rate, tremor, sweating, and vomiting. Convulsions have been reported. Its use is relatively contraindicated in people with coronary heart disease, epilepsy, and high blood pressure. It is also contraindicated in newborns and small children, mainly due to the presence of benzyl alcohol, which is included as a preservative. 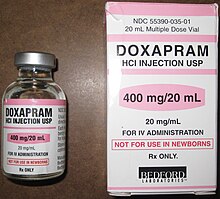 A vial of doxapram

Doxapram stimulates chemoreceptors in the carotid bodies of the carotid arteries, which in turn, stimulates the respiratory centre in the brain stem.

Doxapram is a white to off-white, odorless, crystalline powder that is stable in light and air. It is soluble in water, sparingly soluble in alcohol and practically insoluble in ether. Injectable products have a pH from 3.5-5. Benzyl alcohol or chlorobutanol is added as a preservative agent in the commercially available injections.