Docusate, also known as docusate salts or dioctyl sulfosuccinate,[4] is a laxative of the stool softener type used to treat constipation.[2] It is considered a good choice in children who have hard feces.[2] Use for constipation, however, is poorly supported by evidence.[5][6] It may be taken by mouth or used rectally.[2] By mouth a bowel movement often occurs in 1 to 3 days,[2] while rectal use may be effective within 20 minutes.[7]

Side effects are uncommon.[2] Rarely, there may be abdominal cramps or diarrhea.[2] Efficacy decreases with long-term use, and may cause poor bowel function.[1] Docusate is acceptable during pregnancy and breastfeeding.[8] It works by allowing more water to be absorbed by the feces.[1][9] It typically comes in the form of a sodium, calcium, or potassium salt.[2]

It is on the World Health Organization's List of Essential Medicines.[10] It is available as a generic medication and is not very expensive.[9] In the United States, one hundred doses are about US$14.[2] The sodium salt, dioctyl sodium sulfosuccinate, also is used as a food additive, emulsifier, dispersant, and wetting agent, among other uses.[11] In 2016 it was the 127th most prescribed medication in the United States with more than 5 million prescriptions.[12]

The medication may be given to people who are receiving opioid medication, although prolonged use may cause irritation of the gastrointestinal tract. Data supporting its efficacy in treating chronic constipation are lacking.[14][16]

Docusate sodium, when used with ear syringing, may help with earwax removal, particularly in the case of impaction.[17]

Docusate sodium is approved and recommended as safe during pregnancy and breastfeeding.[18]

Docusate sodium may be given by mouth or rectally. It also is used as an emulsifier and dispersant in topical preparations. When taken by mouth it is typically recommended with plenty of water.

Side effects are typically mild and include stomach pain, diarrhea, or cramping. Serious allergic reactions may occur with the drug. The most severe side effect of docusate, although very rare, is rectal bleeding.[20]

Docusate is not recommended in people with appendicitis, acute abdomen, or ileus.[16]

Docusate might increase resorption of other drugs, for example, dantron (1,8-dihydroxyanthraquinone).[16]

Solubility of dioctyl sodium sulfosuccinate in water is 1:70 (14 g/l) at 25 °C, increasing to 1:20 at 70 °C. Solubility is better in less polar solvents: 1:30 in ethanol, 1:1 in chloroform and diethylether, and practically unlimited in petroleum ether (25 °C). It also is highly soluble in glycerol, although this is a rather polar solvent.

The ester groups are easily cleaved under basic conditions, but are stable against acids.[16]

Docusate does not stay in the gastrointestinal tract, but is absorbed into the bloodstream and excreted via the gallbladder[16] after undergoing extensive metabolism.

The effect of docusate may not necessarily be all due to its surfactant properties. Perfusion studies suggest that docusate inhibits fluid absorption or stimulates secretion in the portion of the small intestine known as the jejunum.[medical citation needed]

Dioctyl sodium sulfosuccinate is used as a surfactant in a wide range of applications, often under the name Aerosol-OT. It is unusual in that it is able to form microemulsions without the use of co-surfactants, and it has a rich variety of aqueous-phase behavior including multiple liquid crystalline phases.[22]

The FDA determined that dioctyl sodium sulfosuccinate is generally recognized as safe (GRAS) for use as wetting agents or solubilizers for flavor emulsion stabilizers in carbonated and non-carbonated drinks at levels up to 10 parts per million.[26] 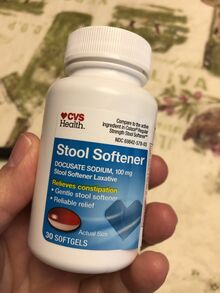 An example of a stool softener

In the UK, dioctyl sodium sulfosuccinate is sold under the brand name Docusol (Typharm Ltd) and DulcoEase (Boehringer Ingelheim).

In Australia, dioctyl sodium sulfosuccinate is sold as Coloxyl and Coloxyl with senna.

Toxicity for different species varies widely, but dioctyl sulfosuccinate biodegrades quickly in soil and water, a typical finding being >90% in 12 to 17 days. In the atmosphere, it is predicted to be removed by a photochemical reaction with an estimated half-life of 18 hours.[27]

Dioctyl sodium sulfosuccinate has been determined to be of low toxicity for crustaceans such as the hermit crab Clibanarius erythropus and the shrimp Crangon crangon.

In a 2010 study, dioctyl sodium sulfosuccinate exhibited higher toxicity against bacteria (Vibrio fischeri, Anabaena sp.) and algae (Pseudokirchneriella subcapitata) than did a number of fluorinated surfactants (PFOS, PFOA, or PFBS). Measuring bioluminescence inhibition of the bacteria and growth inhibition of the algae, the ED50 were in the range of 43–75 mg/l. Combinations of the fluorinated compounds with dioctyl sodium sulfosuccinate showed mid to highly synergistic effects in most settings, meaning that such combinations are significantly more toxic than the individual substances.[28]