Diaper dermatitis is usually a form of irritant contact dermatitis.[3] Less common causes include allergies to substances used in the diaper area, infection, seborrheic dermatitis, or psoriasis.[4] The condition can be worsened by antibiotics by mouth, gastroenteritis, and malnutrition.[3] Infections generally occurs in someone who already has irritant or allergic dermatitis.[3] Diagnosis is usually based on the appearance.[1]

Prevention includes the use of diapers which are superabsorbent and have a low potential to result in allergies.[3] Treatment includes changing diapers as soon as they become dirty, cleaning the area with warm water during diaper changes, and applying moisturizer to the area.[3] In those who also have an infectious component, antifungals such as nystatin or antibiotic creams such as bacitracin/polymyxin B may be used.[3][1] A weak steroid creams may also be helpful.[1]

Diaper dermatitis is the most common rash in babies affected up to half of those in diapers.[1] It occurs most commonly in children 9 to 12 months old and is the reason for up to a quarter of skin related health care visits in those under the age of one.[3] It occurs less commonly in cultures were diapers are less commonly worn.[5] The first clear description of diaper rash dates from 1905, though prior description date from at least 1887.[5]

Generally there are ares of redness and scaling often with the skin folds spared.[3] If diaper dermatitis is complicated by a bacterial or fungal infection small blisters, involvement of the skin folds, and small areas of redness outside the main area of redness may occur.[3]

Often it starts as small pinpoint areas of redness.[1] This may than expand to larger areas of redness with skin breakdown.[1] As the disease becomes more severe pain may occur.[1]

Irritant diaper dermatitis develops when skin is exposed to prolonged wetness, increased skin pH caused by the combination, and subsequent reactions, of urine and feces, and resulting breakdown of the outermost layer of the skin.[1] This may be due to diarrhea, frequent stools, tight diapers, overexposure to ammonia, or allergic reactions.[8] In adults, the stratum corneum is composed of 25 to 30 layers of flattened dead keratinocytes, which are continuously shed and replaced from below. These dead cells are interlaid with lipids secreted by the stratum granulosum just underneath, which help to make this layer of the skin a waterproof barrier. The stratum corneum's function is to reduce water loss, repel water, protect deeper layers of the skin from injury, and to repel microbial invasion of the skin. In infants, this layer of the skin is much thinner and more easily disrupted.[9]

The word "diaper" is in the name not because the diaper necessarily causes the rash but rather the rash is associated with diaper use. It is most often caused by the materials trapped by the diaper (usually feces). Allergic contact dermatitis has also been suggested, but there is less evidence for this cause.[10] In adults with incontinence (fecal, urinary, or both), the rash is sometimes called incontinence-associated dermatitis (IAD).[11][12] 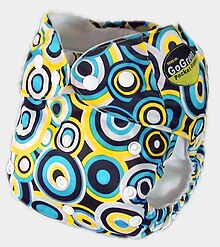 Although wetness alone has the effect of macerating the skin, softening the stratum corneum, and increasing susceptibility to friction injury, urine has an additional impact on skin integrity because of its effect on skin pH. While studies show that ammonia alone is only a mild skin irritant, when urea breaks down in the presence of fecal urease it increases pH because ammonia is released, which in turn promotes the activity of fecal enzymes such as protease and lipase.[1] These fecal enzymes increase the skin's hydration and permeability to bile salts which also act as skin irritants.

It occurs more commonly with traditional cloth diaper than modern disposable diapers.[2] "Babies wearing superabsorbent disposable diapers with a central gelling material have fewer episodes of diaper dermatitis compared with their counterparts wearing cloth diapers. However, keep in mind that superabsorbent diapers contain dyes that were suspected to cause allergic contact dermatitis (ACD)."[13] Whether wearing cloth or disposable diapers they should be changed frequently to prevent diaper rash, even if they do not feel wet. To reduce the rate of diaper rash, disposable diapers have been engineered to pull moisture away from the baby's skin using synthetic non-biodegradable gel. Some cloth diapers use superabsorbent microfiber cloth placed in a pocket with a layer of light permeable material that contacts the skin. This design serves to pull moisture away from the skin in to the microfiber cloth.

The link between feces and diaper dermatitis is also apparent in the observation that infants are more susceptible to developing diaper rash after treating with antibiotics, which affect the intestinal microflora.[14][15] Also, there is an increased incidence of diaper rash in infants who have had diarrhea in the previous 48 hours, which may be because fecal enzymes such as lipase and protease are more active in feces which have passed rapidly through the gastrointestinal tract.[16]

Bacteria on the skin do not appear to be related to the onset of diaper dermatitis.[1] Additionally healthy babies may culture positive for Candida without any symptoms.[1] Though the severity of the diaper rash is linked to the levels of Candida in the stool.[1] A variety of infections has been reported, including Staphylococcus aureus, Streptococcus pyogenes, Proteus mirabilis, enterococci and Pseudomonas aeruginosa, but it appears that Candida is the most common in the diaper areas.[17][18][19]

The diagnosis is generally made based on the appearance.[1] If the diaper dermatitis occurs for greater than 3 days it may be colonized with Candida albicans, giving it the beefy red, sharply marginated, appearance of diaper candidiasis.[20] A fungal infection can be supported by doing a potassium hydroxide preparation while a bacterial infection can be supported by a Gram stain and culture.[1]

Other rashes that occur in the diaper area include seborrhoeic dermatitis and atopic dermatitis. Both Seborrheic and Atopic dermatitis require individualized treatment; they are not the subject of this article.

A variety of other inflammatory and infectious processes can occur in the diaper area and an awareness of these secondary types of diaper dermatitis aids in the accurate diagnosis and treatment.[21]

One measure is to not use diapers for periods of time, thus allowing the affected skin to air out.[1] Another option is to increase the frequency of diaper changing.[1]

Diaper rash appears more common with traditional cloth diapers when washed at home.[1][5] However, there is not enough data to determine if using disposable diapers can prevent diaper dermatitis.[23]

The comparison of services that washes diapers at an industrial scale for reuse and modern disposable diapers has not been done.[5] Furthermore, the effect of non-biodegradable diapers on the environment is a concerning.[24][5]

Another approach is to block moisture from reaching the skin, and commonly recommended remedies using this approach include oil-based protectants or barrier cream, various over-the-counter "diaper creams", petroleum jelly, dimethicone and other oils. Such sealants sometimes accomplish the opposite if the skin is not thoroughly dry, in which case they serve to seal the moisture inside the skin rather than outside.

Zinc oxide-based ointments can be effective, especially in prevention, because they have both a drying and an astringent effect on the skin, being mildly antiseptic without causing irritation.[21]

A 2005 review found no evidence to support the use of topical vitamin A.[25]

Various moisture-absorbing powders, such as talcum or starch, reduce moisture but may result in complications. Powders of any sort if they become airborne can irritate lung tissue, and powders made from starchy plants (corn, arrowroot) provide food for fungi and are not recommended.[26]

In persistent or especially bad rashes, an antifungal cream often has to be used. In cases that the rash is more of an irritation, a topical corticosteroid preparation such as hydrocortisone cream, is used. As it is often difficult to tell a fungal infection apart from a mere skin irritation, a corticosteroid-and-antifungal combination cream such as hydrocortisone/miconazole may be used.

Diaper dermatitis is the most common rash in babies.[1] It occurs most commonly in children 9 to 12 months old and is the reason for up to a quarter of skin related health care visits in those under the age of one.[3]