Diabetic kidney disease (DKD), also known as diabetic nephropathy, is the long-term decreased in kidney function due to diabetes.[1][2] Early on there are generally no symptoms, while later tiredness, foamy urine, and swelling may occur.[1][2] Onset may occurs years after the start of diabetes and gradually worsen.[1][2] Complications may include high blood pressure, kidney failure, and heart disease.[2]

It can be cause by both type 1 and type 2 diabetes.[2] Risk factors include high blood sugar, high blood pressure, family history, smoking, and a high salt diet.[1][2] The underlying mechanism involves high blood sugar damaging the small blood vessels that supply the kidneys and dysfunction of podocytes.[1][2] Diagnosis is based on declining glomerular filtration rate and albumin in the urine after ruling out other causes.[2]

Treatment may slow the progression of the disease.[2] This may lifestyle and dietary changes, blood pressure control, and blood sugar control.[2] Medications frequently used include ACE inhibitors or angiotensin receptor blockers (ARBs).[1] Kidney failure can be treated with dialysis or kidney transplant.[2]

Diabetic kidney disease affects about 33% of adults with diabetes.[1] In the United States it occurs more frequently in African and Native Americans.[2] It is the most common cause of kidney failure in developed countries and is associated with an increased risk of death.[2] The condition began to be gradually defined in the 1700s and 1800s including in work by Erasmus Darwin and Richard Bright.[3]

The onset of symptoms is 5 to 10 years after the disease begins.[4] A usual first symptom is frequent urination at night: nocturia. Other symptoms include tiredness, headaches, a general feeling of illness, nausea, vomiting, frequent daytime urination, lack of appetite, itchy skin, and leg swelling.[4] The clinical presentation of diabetic nephropathy (DN) is characterized by proteinuria (protein in the urine), hypertension and progressive loss of kidney function. The process may be initially indolent, making regular screening for DN in patients with diabetes mellitus of great importance.[5] 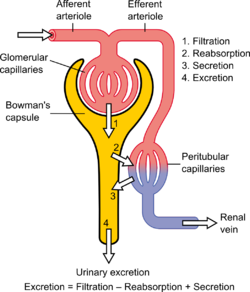 Diagram showing the basic outline of nephron structure and function: diabetic nephropathy is associated with changes in the afferent and efferent arterioles, causing capillary hypertension; and damage to the glomerular capillaries of multiple causes, including mesangial matrix deposition
See also: Review of normal renal physiology

The disease progression of DN involves various clinical stages: hyperfiltration, microalbuminuria, macroalbuminuria, nephrotic proteinuria to progressive chronic kidney disease leading to end-stage renal disease (ESRD). The damage is exerted on all compartments of the kidney: the glomerulus, the renal tubules, the vasculature (afferent and efferent renal arterioles) and the interstitium. Renal fibrosis is the final common pathway of DN. This fibrosis is a product of multiple mechanisms including renal hemodynamic changes, glucose metabolism abnormalities associated with oxidative stress as well as inflammatory processes and an overactive renin-angiotensin-aldosterone system (RAAS).[citation needed]

The pathophysiology of DN is thought to involve an interaction between hemodynamic and metabolic factors.[8]

Hemodynamic factors include an increase in systemic and intraglomerular pressure, as well as the over-activation of the RAAS. Studies have shown that in the setting of diabetes, various factors stimulate the RAAS, which is one of the most important pathways in DN pathophysiology. Due to the higher load of filtered glucose, there is an up-regulation in the sodium-glucose cotransporter 2 (SGLT2) in the proximal tubules, which cotransports sodium and glucose back into circulation. This leads to a decrease in the delivery of sodium chloride to the macula densa in the distal tubules, promoting the release of renin and over-activating RAAS.[9] Hyperfiltration is one of the earliest features of DN. Several mechanisms have been proposed to cause hyperfiltration. One of these mechanisms is that as glomeruli becomes hypertrophied, filtration surface area initially increases. Another possible mechanism is that abnormal vascular control in diabetic nephropathy leads to a reduction in afferent glomerular arteriolar resistance and an increase in efferent glomerular arteriolar resistance, leading to a net increase in renal blood flow (RBF) and glomerular filtration rate (GFR).[10] Glomerular hyperfiltration and an aberrant regulation of RAAS lead to increased intraglomerular pressure, causing stress on the endothelial cells, the mesangial cells and the podocytes. This exacerbates the dysfunction caused by the metabolic effects of hyperglycemia.[citation needed]

Metabolic factors include the formation of advanced glycation end products (AGEs), which have a central role in the pathophysiology of many of the complications of diabetes mellitus, including cardiovascular complications.[11] AGEs are chemical groups that form when a reducing sugar (glucose in this case) reacts non-enzymatically with an amine group, predominantly lysine and arginine, which are attached on proteins, lipids and nucleic acids.[12] These glycosylation products accumulate on the proteins of vessel wall collagen, forming an irreversible complex of cross-linked AGEs. An important way AGEs exert their effect is through a receptor-mediated mechanism, most importantly by the receptor for advanced glycation end products (RAGE). RAGE is a signal transduction receptor found on a number of cell types including macrophages, endothelial cells, renal mesangial cells and podocytes in the glomerulus.[13] Bindings of AGEs to RAGE receptors enhances production of cytosolic Reactive Oxygen Species (ROS) as well as stimulates intracellular molecules such as Protein Kinase C (PKC), NF-kB and the activation of growth factors TGF-B and vascular endothelial growth factor (VEGF). These factors, along with the hemodynamic changes that occur, lead to podocyte injury, oxidative stress, inflammation and fibrosis. As injury worsens, kidney function decreases and glomerular basement membrane (GBM) become more permeable and less efficient at filtration. This is accompanied by a steady decline in kidney function.[citation needed] 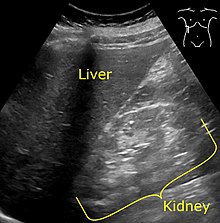 Ultrasonography showing hyperechogenicity of the renal cortex, visualized in the image as brighter than the liver.

Diagnosis is based on the measurement of abnormal levels of urinary albumin in a diabetic[14] coupled with exclusion of other causes of albuminuria. Albumin measurements are defined as follows:[15]

Urinary albumin excretion can also be measured by urinary albumin/creatinine ratio in a spot urine sample, which is as accurate but more convenient than a 24-hour urine collection.[16]

It is recommended that diabetics have their albumin levels checked annually, beginning immediately after a diagnosis of type 2 diabetes and five years after a diagnosis of type 1 diabetes.[14][17] Medical imaging of the kidneys, generally by ultrasonography, is recommended as part of a differential diagnosis if there is suspicion of urinary tract obstruction, urinary tract infection, kidney stones or polycystic kidney disease.[18] Conformation kidney biopsy should only be performed if non-diabetic kidney disease is suspected.

To stage the degree of damage in this (and any) kidney disease, the serum creatinine is determined and used to calculate the estimated glomerular filtration rate (eGFR). Normal eGFR is equal to or greater than 90ml/min/1.73 m2.[21]

Although albuminuria is the most frequently used marker of DN, it has a limited sensitivity as many patients with DN experience GFR loss and glomerulosclerosis without immediate elevation in albuminuria. Many novel markers are currently being studied that potentially detect DN at earlier stages and identify progression risk. Cystatin C is a protein that is freely filtered in the glomeruli before it is reabsorbed and catabolized in the renal tubular cells. Its serum level is independent of muscle mass, making more accurate at estimating GFR than creatinine serum levels.[citation needed]

The goals of treatment are to slow the progression of kidney damage and control related complications. Management of diabetic nephropathy currently centers over four main areas: Cardiovascular risk reduction, glycemic control, blood pressure control as well as inhibition of the RAAS system.[citation needed]

Cardiovascular risk reduction: Patients with diabetes mellitus are at significantly increased risk of cardiovascular disease, which is also an independent risk factor for kidney failure. Therefore, it is important to aggressively manage cardiovascular risk factors in patients diagnosed with DM in general and DN specifically. The main components of managing cardiovascular disease is with tobacco cessation, lipid-lowering therapies (eg, statins) as well as regular exercise and healthy eating.[22] In patients with kidney disease, atorvastatin is preferred over other statins as it does not require dose-adjustment based on GFR.[23]

Glycemic control: Multiple studies have found a positive effect of improved glycemic control on clinical outcomes of patients with diabetic nephropathy.[24] Intensive glycemic control also reduces the rate of other DM complications, such as retinopathy and neuropathy. Glycemic control is maintained mainly with insulin in patients with Type 1 DM and with hypoglycemic agents and/or insulin in patients with type 2 DM. Studies showed a decrease in microvascular complications of diabetic nephropathy with a target goal HbA1c concentration of 7%. Further reduction in the HbA1c did not correlate with better outcomes and is thus not recommended in most patients as it could increase the risk of hypoglycemic episodes.[25][26]

RAAS inhibition: Inhibition of the RAA system can be achieved with multiple therapies, mainly: ACE inhibitors, ARBs, direct renin inhibitors, and mineralocorticoid antagonists. RAAS inhibition has been proven to be the most effective therapy to slow the progression of diabetic nephropathy in all stages.[30] Although RAAS blockade using more than one agent may further reduce proteinuria, the risk of adverse events (such as hyperkalemia, acute kidney injury) outweigh the potential benefits.[31] Therefore, it is recommended that only one agent is used in patients with DM who have hypertension or any signs of microalbuminuria or diabetic nephropathy.[32]

About half of insulin is metabolized and cleared by the kidneys. This means that as kidney function worsens in the setting of DN, some patients with insulin-dependent DM may find that their regular insulin doses are lasting longer than normal, or that they are experiencing an increasing frequency of hypoglycemic episodes. It is also crucial to closely monitor kidney function to properly dose medications that are cleared by the kidneys. Some of the most commonly used nephrotoxic medications are non-steroidal anti-inflammatory drugs (NSAIDs) such as ibuprofen.[33] With worsening kidney function, it might also be necessary to follow a renal-diet to avoid complications such as hyperkalemia and metabolic acidosis. Some evidence suggests that limiting dietary protein could slow the progression of DN, but further evidence is needed to confirm this benefit.[34] Patients with DN might go on to develop End Stage Renal Disease (ESRD) and might require kidney transplantation or the initiation of hemodialysis.[citation needed]

A relatively new medication that has been approved for treatment for DM is sodium glucose cotransporter 2 (SGLT2) inhibitors. The mechanism of action of this drug is to the sodium-glucose uptake cotransporter in the proximal tubule, thereby generating naturesis and glucosuria. In multiple clinical trials, SGLT2 inhibitors showed improved cardiovascular outcomes in patients with DM as well a positive effect on kidney outcomes, mainly a reduction in albuminuria and progression of renal damage.[35][36] Other classes of diabetic medications that have been shown to have a positive effect on the progression of DN are GLP-1 agonists and DPP-4 inhibitors.[citation needed]

Diabetic nephropathy in type 2 diabetes can be more difficult to predict because the onset of diabetes is not usually well established. Without intervention, 20–40 percent of patients with type 2 diabetes/microalbuminuria, will evolve to macroalbuminuria.[37] Diabetic nephropathy is the most common cause of end-stage kidney disease,[38][39] which may require hemodialysisor even kidney transplantation.[40] It is associated with an increased risk of deathin general, particularly from cardiovascular disease.[38][41]

Diabetic nephropathy affects approximately a third of patients with type 1 and type 2 diabetes mellitus. DN is responsible for about a third of cases of ESRD worldwide, and an even larger fraction in the developed countries.[42] Worldwide, the prevalence of diabetes is projected to increase from 382 million in 2013, to over 592 million by 2035. This increase is projected to be sharpest in developed countries. The prevalence of type 2 DM is particularly increasing due to the rising prevalence of obesity worldwide.[43] Diabetic kidney disease progression could lead to ESRD as well as an increased risk of cardiovascular complications, all of which cause a substantial economic burden. The estimated cost of managemet of patients with ESRD due to diabetic nephropathy in the US is 39.35 billion USD in 2010.[44] Within developed countries, certain ethnic groups such as African Americans and Native Americans are at higher risk of developing DN and ESRD.[45]