Desmopressin, sold under the trade name DDAVP among others, is a medication used to treat diabetes insipidus, bedwetting, hemophilia A, von Willebrand disease, and high blood urea levels.[2] In hemophilia A and von Willebrand disease, it should only be used for mild to moderate cases.[2] It may be given in the nose, by injection into a vein, by mouth, or under the tongue.[2]

Common side effects include headaches, diarrhea, and low blood sodium.[2] The low blood sodium that results may cause seizures.[2] It should not be used in people with significant kidney problems or low blood sodium.[2] It appears to be safe to use during pregnancy.[2] It is a synthetic version of vasopressin, the hormone that reduces urine production.[2]

Desmopressin was approved for medical use in the United States in 1978.[2] It is on the World Health Organization's List of Essential Medicines.[3] It is available as a generic medication.[2] In the United States, a typical month's supply costs US$100 to US$200.[4]

Desmopressin is used to treat nocturnal enuresis (bedwetting). It is usually prescribed in the form of desmopressin acetate, by mouth. Children taking DDAVP have 2.2 fewer wet nights per week and are 4.5 times more likely to sleep without disruption compared with placebo.[5][6]

Desmopressin has some benefit in adults who have problems with night time urination.[7] The FDA approved this use for those who make excess urine in 2017.[8]

Desmopressin is used in the treatment of central diabetes insipidus (DI) as a replacement for endogenous antidiuretic hormone (ADH) that is in insufficient quantity due to decreased or non-existent secretion or production of ADH by the posterior pituitary or hypothalamus, respectively. It is also used in the diagnostic workup for diabetes insipidus, in order to distinguish central from DI due to the kidneys. Desmopressin is not effective at treating nephrogenic DI, thus a positive response is generally indicative of central DI.

US drug regulators added warning to the nasal sprays after two people died and fifty-nine other people had seizures. This occurred due to hyponatremia, a deficit of the body's sodium levels, and the nasal spray is no longer approved for use in children in the United States.[9] However, US drug regulators have said that desmopressin tablets can still be considered safe for treatment of nocturnal enuresis in children as long as the person is otherwise healthy. 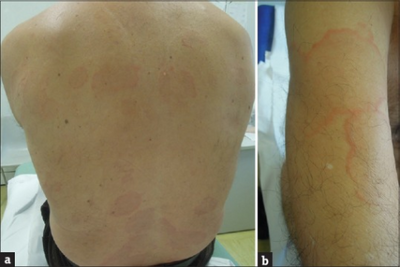 Multiple, pruritic, erythematous, annular plaques on the trunk (a); recurrence of lesions after desmopressin rechallenge (b)

A body needs to maintain a balance of water and (sodium). If sodium levels become too low (hyponatremia) – either as a result of increased water take-up or reduced salt levels – a person may have seizures and, in extreme cases, may die.[10]

This medication may also cause cutaneous reactions:[11]

Desmopressin works by limiting the amount of water that is eliminated in the urine; that is, it is an antidiuretic. It works at the level of the renal collecting duct by binding to V2 receptors, which signal for the translocation of aquaporin channels via cytosolic vesicles to the apical membrane of the collecting duct. The presence of these aquaporin channels in the distal nephron causes increasing water reabsorption from the urine, which becomes passively re-distributed from the nephron to systemic circulation by way of basolateral membrane channels.[12] Desmopressin also stimulates release of von Willebrand factor from endothelial cells by acting on the V2 receptor.

Desmopressin is degraded more slowly than recombinant vasopressin, and requires less frequent administration. In addition, it has little effect on blood pressure, while vasopressin may cause arterial hypertension. Vasopressin stimulates the release of ACTH, which indirectly increases responsiveness of alpha-1 receptor in blood vessel smooth muscle, increasing vessel tone and blood pressure.[citation needed] Several studies have shown that Desmopressin does not stimulate ACTH release (except in Cushing's Disease),[13][14][15] and therefore does not directly raise blood pressure, however, one study showed that it stimulates ACTH release in over 50% of healthy subjects.[16] Additionally, desmopressin is able to enhance ACTH and cortisol release in normal subjects following oCRH administration, but not in patients with anorexia nervosa.[15]

Compared to vasopressin, desmopressin's first amino acid has been deaminated, and the arginine at the eighth position is in the dextro rather than the levo form (see stereochemistry).