Deferasirox, sold under the brand name Exjade among others, is a medication used for chronic iron overload in those receiving long-term blood transfusions for conditions such as beta-thalassemia and other chronic anemias.[2] It is generally only when deferoxamine is not sufficient.[2] It is taken by mouth.[3]

Common side effects include kidney problems, nausea, diarrhea, heart burn, rash, itchiness, and liver problems.[2] Other side effects may include metabolic acidosis, bone marrow suppression, and gastrointestinal bleeding.[2][1] It should not be used in people with kidney problems.[1] It is believed to be harmful in pregnancy.[5] It is an iron chelator.[1]

It is approved in the European Union by the European Medicines Agency (EMA) for children six years and older for chronic iron overload from repeated blood transfusions.[9][10][11]

It may be used in those 2 years and over if deferoxamine is not sufficient.[2]

Deferasirox ranked second on the list of drugs most frequently suspected in reported patient deaths compiled for 2019 by the Institute for Safe Medical Practices, with 1320 suspected deaths.[12] A boxed warning was added in the same year with regard to kidney failure, liver failure and gastrointestinal bleeding.[13] It is suspected that the main driver of this spike in suspected deaths relates to the re-analysis of adverse event data by Novartis.[12]

The half-life of deferasirox is between 8 and 16 hours allowing once a day dosing. Two molecules of deferasirox are capable of binding to 1 atom of iron which are subsequently eliminated by fecal excretion. Its low molecular weight and high lipophilicity allows the drug to be taken orally unlike deferoxamine which has to be administered by IV route (intravenous infusion). Together with deferiprone, deferasirox seems to be capable of removing iron from cells (cardiac myocytes and hepatocytes) as well as removing iron from the blood. 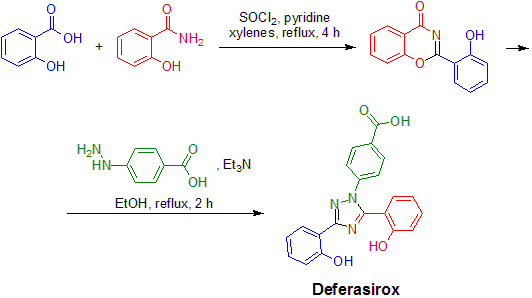 The condensation of salicyloyl chloride (formed in situ from salicylic acid and thionyl chloride) with salicylamide under dehydrating reaction conditions results in formation of 2-(2-hydroxyphenyl)-1,3(4H)-benzoxazin-4-one. This intermediate is isolated and reacted with 4-hydrazinobenzoic acid in the presence of base to give 4-(3,5-bis(2-hydroxyphenyl)-1,2,4-triazol-1-yl)benzoic acid (deferasirox).[14]