Dantrolene sodium, sold under the brand name Dantrium among others, is a medication used to treat malignant hyperthermia, neuroleptic malignant syndrome, and muscle spasticity.[1][2] This may include spasticity such as due to multiple sclerosis, cerebral palsy, or stroke.[2] Other possible uses include MDMA toxicity.[5] It may be used by injection into a vein or by mouth.[1]

Common side effects include sleepiness, dizziness, weakness, and diarrhea.[2] Intravenous use may also result in inflammation at the site.[2] Other side effects may include liver problems or palpitations.[1] It works by blocking Ca2+ ions release by skeletal muscles and thereby preventing their contraction.[1] 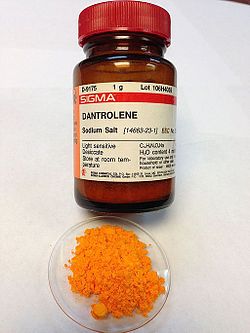 The sodium salt of dantrolene (shown) is an orange crystalline solid.

It is used to treat malignant hyperthermia, neuroleptic malignant syndrome, and muscle spasticity.[1][2] This may include spasticity such as due to multiple sclerosis, cerebral palsy, or stroke.[2] Other possible uses include ecstasy toxicity.[5]

For malignant hyperthermia the initial dose is generally 2 to 3 mg per kg.[1] Repeated doses of 1 mg per kg may be given.[1] The maximum dose is 10 mg per kg.[1]

Central nervous system side effects are quite frequently noted and encompass speech and visual disturbances, mental depression and confusion, hallucinations, headache, insomnia and exacerbation or precipitation of seizures, and increased nervousness. Infrequent cases of respiratory depression or a feeling of suffocation have been observed. Dantrolene often causes sedation severe enough to incapacitate the patient to drive or operate machinery.

Liver side effects may be seen either as asymptomatic elevation of liver enzymes and/or bilirubin or, most severe, as fatal and nonfatal liver inflammation. The risk of liver inflammation is associated with the duration of treatment and the daily dose. In patients treated for hyperthermia, no liver toxicity has been observed so far. Patients on chronic dantrolene therapy should routinely have LFTs monitored.

It is unclear whether dantrolene has carcinogenic effects.

Oral dantrolene cannot be used by:

If the indication is a medical emergency, such as malignant hyperthermia, the only significant contraindication is hypersensitivity.

If needed in pregnancy, adequate human studies are lacking, therefore the drug should be given in pregnant women only if clearly indicated. It may cause hypotonia in the newborn if given closely before delivery.[5]

Dantrolene may interact with the following drugs:[9]

Dantrolene depresses excitation-contraction coupling in skeletal muscle by acting as a receptor antagonist to the ryanodine receptor, and decreasing free intracellular calcium concentration.[5]

Skeletal formula of azumolene. The bromine atom replacing the nitro group found in dantrolene may be seen at left.

The original patent synthesis started with para-nitroaniline which undergoes diazotization followed by a copper(II) chloride catalyzed arylation with furfural (essentially a modified Meerwein arylation). This then reacts with 1-aminohydantoin to form the final product.

Dantrolene was first described in the scientific literature in 1967, as one of several hydantoin derivatives proposed as a new class of muscle relaxant.[12] Dantrolene underwent extensive further development, and its action on skeletal muscle was described in detail in 1973.[13]

Dantrolene was widely used in the management of spasticity[14] before its efficacy in treating malignant hyperthermia was discovered by South African anesthesiologist Gaisford Harrison and reported in a landmark 1975 article published in the British Journal of Anaesthesia.[15] Harrison experimentally induced malignant hyperthermia with halothane anesthesia in genetically susceptible pigs, and obtained an 87.5% survival rate, where seven of his eight experiments survived after intravenous administration of dantrolene. The efficacy of dantrolene in humans was later confirmed in a large, multicenter study published in 1982,[16] and confirmed epidemiologically in 1993.[17] Before dantrolene, the only available treatment for malignant hyperthermia was procaine, which was associated with a 60% mortality rate in animal models.[15]