Cricothyrotomy is a cut through the skin and cricothyroid membrane to establish an airway when other means of ventilating a person, such as intubation and bag valve mask fail.[3] This may include in the setting of excessive bleeding within the mouth or facial trauma.[3]

While the procedure can be done in a number of ways, a common technique is the "scalpel-finger-bougie".[3] The first step is locating the cricothyroid membrane (CTM) between the thyroid and cricoid cartilage.[3] A 4 cm vertical cut is made through the skin.[3] A horizontal cut is made through the CTM.[3] A finger and then a bougie is placed in the hole.[3] A 6.0 ET tube is then placed over the bougie until the cuff just disappears at which point it is inflated.[3]

Signs of success include end-tidal CO2 and chest rise on both sides.[3][4] The ET tube is than secured in place.[3] In those at high risk, set up for a cricothyrotomy may be done before starting intubation.[4] The procedure cannot be carried out in those under the age of 6 to 8 years, though jet ventilation may be done in younger people.[1][2] Cricothyrotomy is easier to perform than a tracheotomy, though this procedure may be performed at a later date.[3][1]

The procedure was first formally carried out in 1909, though did not come into common use until the 1970s.[3] Use has become less common due to other improvements in airway management.[1] The average time to perform the procedure is just over a minute.[4]

A cricothyrotomy is often used as an airway of last resort given the numerous other airway options available including standard tracheal intubation and rapid sequence induction which are the common means of establishing an airway.[5] Cricothyrotomies account for approximately 1% of all emergency department intubations, and is used mostly in persons who have experienced a traumatic injury.[5]

Some general indications for this procedure include:[5]

Rarely it may be done before attempting to intubate in an awake person, when intubation is deemed to be likely impossible.[6] 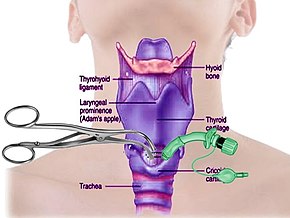 Some of the tools and landmarks for a cricothyrotomy[3]

Sedation such as with 20 mg of intravenous ketamine may be used if required and time permits.[4] The person is placed on their back and if a roll can be placed between the shoulders it may make the procedure easier.

Equipment needed for the scalpel technique

A longer vertical cut may be made if locating the CTM is difficult.[4] The average time to perform the procedure is just over a minute.[4]

A needle cricothyrotomy is similar, but instead of making a scalpel incision, a large over-the-needle catheter is inserted (10- to 14-gauge). Air is aspirated and a wire is placed through the needle. A dilator and tube is than placed over the wire. There are specially designed kits with this equipment.

If the dilator and tube is not used the technique provides very limited airflow. The delivery of oxygen to the lungs through an over-the-needle catheter using a high pressure gas source is considered a form of ventilation called percutaneous transtracheal ventilation (PTV).

Signs of success include end-tidal CO2 and chest rise on both sides.[3][4] The ET tube is than secured in place.[3] A chest X-ray is than done to confirm placement.[2]

The procedure was first formally carried out in 1909 by Chevalier Jackson though did not come into common use until the 1970s.[3]

On the TV show M*A*S*H,[7] Father Mulcahy performs an emergency cricothyrotomy on a person. With the direction of Dr. Pierce via radio, he uses a pen, knife and an eyedropper to perform the operation. Needless to say, this would be extremely dangerous in real life. Even under ideal, clinical conditions, a cricothyrotomy is difficult and requires specific tools, preparation and a practiced knowledge of anatomy. There are many major blood vessels and nerves in the neck and cutting there carries a high risk of harming the person.

In Grey's Anatomy, emergency cricothyrotomy is mentioned in at least three episodes:

In the ER episode "Reason to Believe" Dr. Kerry Weaver performs an emergency cricothyrotomy on a student. She is shooting a news segment on childhood obesity in an elementary school cafeteria when one of the students begins to choke; after the heimlich maneuver fails, she performs a cricothyrotomy with a kitchen knife and a drinking straw.

In the film Playing God (1997), David Duchovny plays a famed LA surgeon, stripped of his license due to drug abuse, who finds himself witnessing a gunfight at a bar. He saves a mafia crime figure by performing an emergency cricothyrotomy. This endears him with the mafia family and drives the plot forward.

In the BBC3 medical drama Bodies, the main protagonist Rob Lake, a newly appointed obstetrics and gynaecology registrar (played by Max Beesley), is called to a patient who is having difficulty breathing due to epiglottitis. Lake calls for emergency assistance but help is slow coming, so fearing for the patient's life decides to undertake a cricothyrotomy himself - a procedure he has not been trained in. The procedure is unsuccessful and the patient dies before help arrives. The guilt surrounding the event combined with the covering up by his consultant provides an important backdrop to the further development of the character and his relationship with his consultant.

In Dr. Quinn, Medicine Woman, Sully, the white man raised by Native Americans who is her lover and companion, performs the procedure on one of Dr. Quinn's boys using a bird's feather (the base where it is hollow).

During an episode of the National Geographic Channel documentary "Inside Combat Rescue",[8] a US Air Force Pararescueman in Afghanistan performs an actual cricothyrotomy on a wounded civilian, in a helicopter maneuvering under combat conditions. The procedure is successful and the patient is delivered to Kandahar Regional Medical Hospital.

On the New Zealand soap opera Shortland Street, Series 21, Episode 5104/5105, student doctor Paige Munroe performs a cricothyrotomy with a pocket knife and pen and saves a woman's life, even though she was not qualified (and nervous).

In the novel Night Train to Lisbon by Swiss author Pascal Mercier, one of the protagonists saves the life of his asphyxiating sister by performing a provisional cricothyrotomy with a ballpoint pen.

In the 1997 film Anaconda, when the character Dr. Steven Cale (Eric Stoltz) is stung in the mouth by a poisonous wasp found in his scuba equipment, Paul Serone (Jon Voight) performs the procedure using a pocket knife and rigid plastic tube.