From WikiProjectMed
Jump to navigation Jump to search
"Adrenal hyperplasia" redirects here. You may also be interested in primary aldosteronism or Cushing's syndrome.

Congenital adrenal hyperplasia (CAH) is a group of genetic disorders that affect the adrenal glands.[4] Symptoms depend on the type.[1] This may include dehydration, vomiting, diarrhea, short stature, and abnormal primary or secondary sex characteristics.[1] Complications may include adrenal crisis.[1] Symptom onset varies from at birth to early adulthood.[1]

It results from a deficiency of an enzyme required to make cortisol in the adrenal cortex.[5] This may result in low levels of cortisol, low levels or aldosterone, or high levels of androgens.[4] They are inherited in an autosomal recessive manner.[5] Some forms are tested for as part of newborn screening programs.[1]

While severe congenital adrenal hyperplasia is rare, affecting about 1 in 10,000 people; mild disease occurs in up to 1 in 100.[1] Among inherited metabolic disorders, it is a relatively common.[6] The condition was first clearly described in 1865 by Luigi De Crecchio, when he dissected a body that had body hair typical for a male, a uterus, a very large adrenal glands.[7]

The symptoms of CAH vary depending upon the form of CAH and the sex of the patient. Symptoms can include:

Due to inadequate mineralocorticoids:[citation needed]

Due to excess androgens:

Due to insufficient androgens and estrogens:[citation needed]

CAH can occur in various forms. The clinical presentation of each form is different and depends to a large extent on the underlying enzyme defect, its precursor retention, and deficient products.[12] Classical forms appear in infancy, and nonclassical forms appear in late childhood. The presentation in patients with classic CAH can be further subdivided into two forms: salt-wasting and simple-virilizing, depending on whether mineralocorticoid deficiency presents or absents, respectively.[13] This subtyping is often not clinically meaningful, though, because all patients lose salt to some degree, and clinical presentations may overlap.[14]

In 75% of cases of severe enzyme deficiency, insufficient aldosterone production can lead to salt wasting, failure to thrive, hypovolemia, and shock. A missed diagnosis is related to an increased risk of early neonatal morbidity and death.[15]

The main feature in newborn females is the abnormal development of the external genitalia, which has varying degrees of virilization. According to guidelines, for newborns found to have bilateral inaccessible gonads, CAH evaluation should be considered. If virilizing CAH cannot be identified and treated, both boys and girls may undergo rapid postnatal growth and virilization.[15]

A mild or "nonclassic" form exists, which is characterized by varying degrees of postnatal androgen excess, but is sometimes asymptomatic.[15] The nonclassic form may be noticed in late childhood and may lead to accelerated growth, premature sexual maturation,[13] acne, and secondary polycystic ovary syndrome.[16] In adult males, early balding and infertility may suggest the diagnosis.[16] The nonclassic form is characterized by mild subclinical impairment of cortisol synthesis;[15] serum cortisol concentration is usually normal.[16]

CAH results from mutations of genes for enzymes mediating the biochemical steps of production of mineralocorticoids, glucocorticoids, or sex steroids from cholesterol by the adrenal glands (steroidogenesis).[17]

Each form of CAH is associated with a specific defective gene. The most common type (95% of cases)[15] involves the gene for 21-hydroxylase, which is found on 6p21.3 as part of the HLA complex; 21-hydroxylase deficiency results from a unique mutation with two highly homologous near-copies in series consisting of an active gene (CYP21A2) and an inactive pseudogene (CYP21A1P). Mutant alleles result from recombination between the active and pseudogenes (gene conversion).[18] About 5% of cases of CAH are due to defects in the gene encoding 11β-hydroxylase and consequent 11β-hydroxylase deficiency. Other, more rare forms of CAH are caused by mutations in genes, including HSD3B2 (3β-hydroxysteroid dehydrogenase 2), CYP17A1 (17α-hydroxylase/17,20-lyase),[19] CYP11A1 (P450scc; cholesterol side-chain cleavage enzyme), STAR (steroidogenic acute regulatory protein; StAR), CYB5A (cytochrome b5), and CYPOR (cytochrome P450 oxidoreductase; POR).[citation needed]

Female infants with classic CAH have ambiguous genitalia due to exposure to high concentrations of androgens in utero. CAH due to 21-hydroxylase deficiency is the most common cause of ambiguous genitalia in genotypically normal female infants (46XX). Less severely affected females may present with early pubarche. Young women may present with symptoms of polycystic ovarian syndrome (oligomenorrhea, polycystic ovaries, hirsutism).

Males with classic CAH generally have no signs of CAH at birth. Some may present with hyperpigmentation, due to co-secretion with melanocyte-stimulating hormone, and possible penile enlargement. Age of diagnosis of males with CAH varies and depends on the severity of aldosterone deficiency. Boys with salt-wasting disease present early with symptoms of hyponatremia and hypovolemia. Boys with non-salt-wasting disease present later with signs of virilization.[18]

In rarer forms of CAH, males are undermasculinized [20] and females generally have no signs or symptoms at birth.[medical citation needed]

Genetic analysis can be helpful to confirm a diagnosis of CAH, but it is not necessary if classic clinical and laboratory findings are present.

Cortisol is an adrenal steroid hormone required for normal endocrine function. Production begins in the second month of fetal life. Poor cortisol production is a hallmark of most forms of CAH. Inefficient cortisol production results in rising levels of ACTH, because cortisol feeds back to inhibit ACTH production, so loss of cortisol results in increased ACTH.[21] This increased ACTH stimulation induces overgrowth (hyperplasia) and overactivity of the steroid-producing cells of the adrenal cortex. The defects causing adrenal hyperplasia are congenital (i.e. present at birth). 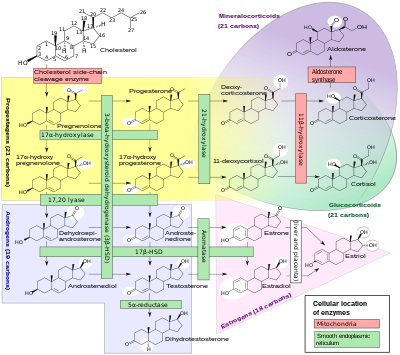 Steroidogenesis: The enzymes affected in CAH are represented by one red and four green bars on the top half of the diagram (for example, "21α-hydroxylase" is visible near the top center. "17α-hydroxylase" and "17,20 lyase" are carried out by a single enzyme).[22] Depending upon which enzyme is unavailable, production of androgens (lower left) or mineralocorticoids (upper right) is reduced. This, in turn, can lead to increased production of other molecules, due to a buildup of precursors.

Cortisol deficiency in CAH is usually partial, and not the most serious problem for an affected person. Synthesis of cortisol shares steps with synthesis of mineralocorticoids such as aldosterone, androgens such as testosterone, and estrogens such as estradiol. The resulting excessive or deficient production of these three classes of hormones produce the most important problems for people with CAH. Specific enzyme inefficiencies are associated with characteristic patterns of over- or underproduction of mineralocorticoids or sex steroids.

Since the 1960s, most endocrinologists have referred to the forms of CAH by the traditional names in the left column, which generally correspond to the deficient enzyme activity. As exact structures and genes for the enzymes were identified in the 1980s, most of the enzymes were found to be cytochrome P450 oxidases and were renamed to reflect this. In some cases, more than one enzyme was found to participate in a reaction, and in other cases, a single enzyme mediated in more than one reaction. Variation in different tissues and mammalian species also was found.

Currently, in the United States and over 40 other countries, every child born is screened for 21-hydroxylase CAH at birth. This test detects elevated levels of 17α-hydroxyprogesterone (17-OHP). Detecting high levels of 17-OHP enables early detection of CAH. Newborns detected early enough can be placed on medication and live relatively normal lives.[citation needed]

The screening process, however, is characterized by a high false-positive rate. In one study, CAH screening had the lowest positive predictive value (111 true-positive cases among 20,647 abnormal screening results in a 2-year period, or 0.53%, compared with 6.36% for biotinidase deficiency, 1.84% for congenital hypo-thyroidism, 0.56% for classic galactosemia, and 2.9% for phenylketonuria). According to this estimate, 200 unaffected newborns required clinical and laboratory follow-up for every true case of CAH.[23]

Since the clinical manifestations of each form of CAH are unique and depend to a large extent on the underlying enzyme defects, their precursor retention and defective products, the therapeutic goal of CAH is to replenish insufficient adrenal hormones and suppress excess of precursors.[12]

Treatment of all forms of CAH may include any of:

If CAH is caused by the deficiency of the 21-hydroxylase enzyme, then treatment aims to normalize levels of main substrate of the enzyme - 17α-hydroxyprogesterone.[15]

The incidence varies ethnically. In the United States, congenital adrenal hyperplasia in its classic form is particularly common in Native Americans and Yupik Inuit (incidence ​1⁄280). Among American Caucasians, the incidence of the classic form is about ​1⁄15,000).[18]

Continued treatment and wellness are enhanced by education and follow up.[24]

I propose in this narrative that it is sometimes extremely difficult and even impossible to determine sex during life. In one of the anatomical theaters of the hospital..., there arrived toward the end of January a cadaver which in life was the body of a certain Joseph Marzo... The general physiognomy was decidedly male in all respects. There were no feminine curves to the body. There was a heavy beard. There was some delicacy of structure with muscles that were not very well developed... The distribution of pubic hair was typical of the male. Perhaps the lower extremities were somewhat delicate, resembling the female, and were covered with hair... The penis was curved posteriorly and measured 6 cm, or with stretching, 10 cm. The corona was 3 cm long and 8 cm in circumference. There was an ample prepuce. There was a first grade hypospadias... There were two folds of skin coming from the top of the penis and encircling it on either side. These were somewhat loose and resembled labia majora.

It was of the greatest importance to determine the habits, tendencies, passions, and general character of this individual... I was determined to get as complete a story as possible, determined to get at the base of the facts and to avoid undue exaggeration which was rampant in the conversation of many of the people present at the time of the dissection.

He interviewed many people and satisfied himself that Joseph Marzo "conducted himself within the sexual area exclusively as a male", even to the point of contracting the "French disease" on two occasions. The cause of death was another in a series of episodes of vomiting and diarrhea.[25]

This account was translated by Alfred Bongiovanni from De Crecchio ("Sopra un caso di apparenzi virili in una donna". Morgagni 7:154–188, 1865) in 1963 for an article in The New England Journal of Medicine.

The association of excessive sex steroid effects with diseases of the adrenal cortex have been recognized for over a century. The term "adrenogenital syndrome" was applied to both sex-steroid producing tumors and severe forms of CAH for much of the 20th century, before some of the forms of CAH were understood. Congenital adrenal hyperplasia, which also dates to the first half of the century, has become the preferred term to reduce ambiguity and to emphasize the underlying pathophysiology of the disorders.

Much modern understanding and treatment of CAH comes from research conducted at Johns Hopkins Medical School in Baltimore in the middle of the 20th century. Lawson Wilkins, "founder" of pediatric endocrinology, worked out the apparently paradoxical pathophysiology: that hyperplasia and overproduction of adrenal androgens resulted from impaired capacity for making cortisol. He reported use of adrenal cortical extracts to treat children with CAH in 1950. Genital reconstructive surgery was also pioneered at Hopkins. After application of karyotyping to CAH and other intersex disorders in the 1950s, John Money, JL Hampson, and JG Hampson persuaded both the scientific community and the public[citation needed] that sex assignment should not be based on any single biological criterion, and gender identity was largely learned and has no simple relationship with chromosomes or hormones. See Intersex for a fuller history, including recent controversies over reconstructive surgery.

Hydrocortisone, fludrocortisone, and prednisone were available by the late 1950s. By 1980, all of the relevant steroids could be measured in blood by reference laboratories for patient care. By 1990, nearly all specific genes and enzymes had been identified. The last decade, though, has seen a number of new developments, discussed more extensively in congenital adrenal hyperplasia due to 21-hydroxylase deficiency:

Notable people with CAH include: