In 2016, complications of pregnancy, childbirth, and the puerperium resulted globally in 230,600 deaths, down from 377,000 deaths in 1990. The most common causes of maternal mortality are maternal bleeding, postpartum infections including maternal sepsis, hypertensive diseases of pregnancy, obstructed labor, and pregnancy with abortive outcome, which includes miscarriage, ectopic pregnancy, and elective abortion.[6]

There is no clear distinction between complications of pregnancy and symptoms and discomforts of pregnancy. However, the latter do not significantly interfere with activities of daily living or pose any significant threat to the health of the mother or baby. Still, in some cases, the same basic feature can manifest as either a discomfort or a complication depending on the severity. For example, mild nausea may merely be a discomfort (morning sickness), but if severe and with vomiting causing water-electrolyte imbalance it can be classified as a pregnancy complication (hyperemesis gravidarum).

The following problems originate in the mother, however, they may have serious consequences for the fetus as well.

Gestational diabetes is when a woman, without a previous diagnosis of diabetes, develops high blood sugar levels during pregnancy.[7][8] There are many non-modifiable and modifiable risk factors that lead to the devopment of this complication. Non-modifiable risk factors include a family history of diabetes, advanced maternal age, and ethnicity. Modifiable risk factors include maternal obesity. There is an elevated demand for insulin during pregnancy which leads to increased insulin production from pancreatic β cells. The elevated demand is a result of increased maternal calorie intake and weight gain, and increased production of prolactin and growth hormone. Gestational diabetes increases risk for further maternal and fetal complications such as development of pre-eclampsia, need for cesarean delivery, preterm delivery, polyhydramnios, macrosomia, shoulder dystocia, fetal hypoglycemia, hyperbilirubinemia, and admission into the neonatal intensive care unit. The increased risk is correlated with the how well the gestational diabetes is controlled during pregnancy with poor control associated with worsened outcomes. A multidisciplinary approach is used to treat gestational diabetes and involves monitoring of blood-glucose levels, nutritional and dietary modifications, lifestyle changes such as increasing physical activity, maternal weight management, and medication such as insulin.[8]

Hyperemesis gravidarum is the presence of severe and persistent vomiting, causing dehydration and weight loss. It is similar although more severe than the common morning sickness.[9][10] It is estimated to affect 0.3–3.6% of pregnant women and is the greatest contributor to hospitalizations under 20 weeks of gestation. Most often, nausea and vomiting symptoms during pregnancy resolve in the first trimester, however, some continue to experience symptoms. Hyperemesis gravidarum is diagnosed by the following criteria: greater than 3 vomiting episodes per day, ketonuria, and weight loss of more than 3 kg or 5% of body weight. There are several non-modifiable and modifiable risk factors that predispose women to development of this condition such as female fetus, psychiatric illness history, high or low BMI pre-pregnancy, young age, African American or Asian ethnicity, type I diabetes, multiple pregnancies, and history of pregnancy affected by hyperemesis gravidarum. There are currently no known mechanisms for the cause of this condition. This complication can cause nutritional deficiency, low pregnancy weight gain, dehydration, and vitamin, electrolyte, and acid-based disturbances in the mother. It has been shown to cause low birth weight, small gestational age, preterm birth, and poor APGAR scores in the infant. Treatments for this condition focus on preventing harm to the fetus while improving symptoms and commonly include fluid replacement and consumption of small, frequent, bland meals. First-line treatments include ginger and acupuncture. Second-line treatments include vitamin B6 +/- doxylamine, antihistamines, dopamine antagonists, and serotonin antagonists. Third-line treatments include corticosteroids, transdermal clonidine, and gabapentin. Treatments chosen are dependent on severity of symptoms and response to therapies.[11]

Pelvic girdle pain (PGP) disorder is pain in the area between the posterior iliac crest and gluteal fold beginning peri or postpartum caused by instability and limitation of mobility. It is associated with pubic symphysis pain and sometimes radiation of pain down the hips and thighs. For most pregnant individuals, PGP resolves within three months following delivery, but for some it can last for years, resulting in a reduced tolerance for weight bearing activities. PGP affects around 45% of individuals during pregnancy: 25% report serious pain and 8% are severely disabled.[12][13] Risk factors for complication development include multiparity, increased BMI, physically strenuous work, smoking, distress, history of back and pelvic trauma, and previous history of pelvic and lower back pain. This syndrome results from a growing uterus during pregnancy that causes increased stress on the lumbar and pelvic regions of the mother, thereby, resulting in postural changes and reduced lumbopelvic muscle strength leading to pelvic instability and pain. It is unclear whether specific hormones in pregnancy are associated with complication development. PGP can result in poor quality of life, predisposition to chronic pain syndrome, extended leave from work, and psychosocial distress. Many treatment options are available based on symptom severity. Non-invasive treatment options include activity modification, pelvic support garments, analgesia with or without short periods of bed rest, and physiotherapy to increase strength of gluteal and adductor muscles reducing stress on the lumbar spine. Invasive surgical management is considered a last-line treatment if all other treatment modalities have failed and symptoms are severe.[13]

Deep vein thrombosis (DVT), a form of venous thromboembolism (VTE), has an incidence of 0.5 to 7 per 1,000 pregnancies, and is the second most common cause of maternal death in developed countries after bleeding.[19] 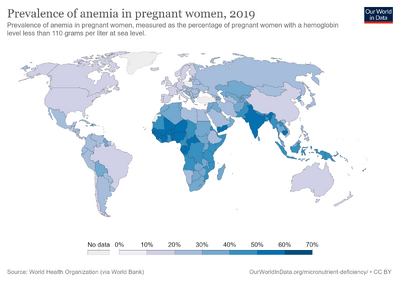 Levels of hemoglobin are lower in the third trimesters. According to the United Nations (UN) estimates, approximately half of pregnant individuals develop anemia worldwide. Anemia prevalences during pregnancy differed from 18% in developed countries to 75% in South Asia.[21]

Treatment varies due to the severity of the anaemia, and can be used by increasing iron containing foods, oral iron tablets or by the use of parenteral iron.[7]

A pregnant woman is more susceptible to certain infections. This increased risk is caused by an increased immune tolerance in pregnancy to prevent an immune reaction against the fetus, as well as secondary to maternal physiological changes including a decrease in respiratory volumes and urinary stasis due to an enlarging uterus.[22] Pregnant individuals are more severely affected by, for example, influenza, hepatitis E, herpes simplex and malaria.[22] The evidence is more limited for coccidioidomycosis, measles, smallpox, and varicella.[22] Mastitis, or inflammation of the breast, occurs in 20% of lactating individuals.[23]

Some infections are vertically transmissible, meaning that they can affect the child as well.

Peripartum cardiomyopathy is a heart failure caused by a decrease in left ventricular ejection fraction (LVEF) to <45% which occurs towards the end of pregnancy or a few months postpartum. Symptoms include shortness of breath in various positions and/or with exertion, fatigue, pedal edema, and chest tightness. Risk factors associated with the development of this complication include maternal age over 30 years, multi gestational pregnancy, family history of cardiomyopathy, previous diagnosis of cardiomyopathy, pre-eclampsia, hypertension, and African ancestry. The pathogenesis of peripartum cardiomyopathy is not yet known, however, it is suggested that multifactorial potential causes could include autoimmune processes, viral myocarditis, nutritional deficiencies, and maximal cardiovascular changes during which increase cardiac preload. Peripartum cardiomyopathy can lead to many complications such as cardiopulmonary arrest, pulmonary edema, thromboembolisms, brain injury, and death. Treatment of this condition is very similar to treatment of non-gravid heart failure patients, however, safety of the fetus must be prioritized. For example, for anticoagulation due to increased risk for thromboembolism, low molecular weight heparin which is safe for use during pregnancy is used instead of warfarin which crosses the placenta.[24]

Hypothyroidism (commonly caused by Hashimoto's disease) is an autoimmune disease that affects the thyroid by causing low thyroid hormone levels. Symptoms of hypothyroidism can include low energy, cold intolerance, muscle cramps, constipation, and memory and concentration problems.[25] It is diagnosed by the presence of elevated levels of thyroid stimulation hormone or TSH. Patients with elevated TSH and decreased levels of free thyroxine or T4 are considered to have overt hypothyroidism. While those with elevated TSH and normal levels of free T4 are considered to have subclinical hypothyroidism.[26] Risk factors for developing hypothyroidism during pregnancy include iodine deficiency, history of thyroid disease, visible goiter, hypothyroidism symptoms, family history of thyroid disease, history of type 1 diabetes or autoimmune conditions, and history of infertility or fetal loss. Various hormones during pregnancy affect the thyroid and increase thyroid hormone demand. For example, during pregnancy, there is increased urinary iodine excretion as well as increased thyroxine binding globulin and thyroid hormone degradation which all increase thyroid hormone demands.[27] This condition can have a profound effect during pregnancy on the mother and fetus. The infant may be seriously affected and have a variety of birth defects. Complications in the mother and fetus can include pre-eclampsia, anemia, miscarriage, low birth weight, still birth, congestive heart failure, impaired neurointellectual development, and if severe, congenital iodine deficiency syndrome.[25][27] This complication is treated by iodine supplementation, levothyroxine which is a form of thyroid hormone replacement, and close monitoring of thyroid function.[27]

The following problems occur in the fetus or placenta, but may have serious consequences on the mother as well.

Ectopic pregnancy is implantation of the embryo outside the uterus

Placental abruption is the separation of the placenta from the uterus.[7]

Placenta praevia is when the placenta fully or partially covers the cervix.[7]

Placenta accreta is an abnormal adherence of the placenta to the uterine wall.[31]

The embryo and fetus have little or no immune function. They depend on the immune function of their mother. Several pathogens can cross the placenta and cause (perinatal) infection. Often microorganisms that produce minor illness in the mother are very dangerous for the developing embryo or fetus. This can result in spontaneous abortion or major developmental disorders. For many infections, the baby is more at risk at particular stages of pregnancy. Problems related to perinatal infection are not always directly noticeable.

The term TORCH complex refers to a set of several different infections that may be caused by transplacental infection.

Babies can also become infected by their mother during birth. During birth, babies are exposed to maternal blood and body fluids without the placental barrier intervening and to the maternal genital tract. Because of this, blood-borne microorganisms (hepatitis B, HIV), organisms associated with sexually transmitted disease (e.g., gonorrhoea and chlamydia), and normal fauna of the genito-urinary tract (e.g., Candida) are among those commonly seen in infection of newborns.

There have been rare but known cases of intrauterine bleeding caused by injury inflicted by the fetus with its fingernails or toenails.[32]

Some common biological risk factors include:

Some common environmental risk factors during pregnancy include:

Some disorders and conditions can mean that pregnancy is considered high-risk (about 6-8% of pregnancies in the USA) and in extreme cases may be contraindicated. High-risk pregnancies are the main focus of doctors specialising in maternal-fetal medicine. Serious pre-existing disorders which can reduce a woman's physical ability to survive pregnancy include a range of congenital defects (that is, conditions with which the woman herself was born, for example, those of the heart or reproductive organs, some of which are listed above) and diseases acquired at any time during the woman's life.