Chloramphenicol is an antibiotic useful for the treatment of a number of bacterial infections.[3] This includes use as an eye ointment to treat conjunctivitis.[5] By mouth or by injection into a vein, it is used to treat meningitis, plague, cholera, and typhoid fever.[3] Its use by mouth or by injection is only recommended when safer antibiotics cannot be used.[3] Monitoring both blood levels of the medication and blood cell levels every two days is recommended during treatment.[3]

Common side effects include bone marrow suppression, nausea, and diarrhea.[3] The bone marrow suppression may result in death.[3] To reduce the risk of side effects treatment duration should be as short as possible.[3] People with liver or kidney problems may need lower doses.[3] In young children a condition known as gray baby syndrome may occur which results in a swollen stomach and low blood pressure.[3] Its use near the end of pregnancy and during breastfeeding is typically not recommended.[6] Chloramphenicol is a broad-spectrum antibiotic that typically stops bacterial growth by stopping the production of proteins.[3]

Chloramphenicol was discovered after being isolated from Streptomyces venezuelae in 1947.[7] Its chemical structure was identified and it was first artificially made in 1949, making it the first antibiotic to be made instead of extracted from a micro-organism.[7]: 26  It is on the World Health Organization's List of Essential Medicines.[8] It is available as a generic medication.[3] The wholesale cost in the developing world of an intravenous dose is about US$0.40–1.90.[9] In the United States an intravenous dose costs about $41.47.[10]

The original indication of chloramphenicol was in the treatment of typhoid, but the now almost universal presence of multiple drug-resistant Salmonella typhi has meant it is seldom used for this indication except when the organism is known to be sensitive.

In low-income countries, the WHO no longer recommends oily chloramphenicol as first-line to treat meningitis, but recognises it may be used with caution if there are no available alternatives.[11]

Chloramphenicol has a broad spectrum of activity and has been effective in treating ocular infections such as conjunctivitis, blepharitis etc. caused by a number of bacteria including Staphylococcus aureus, Streptococcus pneumoniae, and Escherichia coli. It is not effective against Pseudomonas aeruginosa. The following susceptibility data represent the minimum inhibitory concentration for a few medically significant organisms.[13]

Each of these concentrations is dependent upon the bacterial strain being targeted. Some strains of E. coli, for example, show spontaneous emergence of chloramphenicol resistance.[14][15]

Chloramphenicol resistance may be carried on a plasmid that also codes for resistance to other drugs. One example is the ACCoT plasmid (A=ampicillin, C=chloramphenicol, Co=co-trimoxazole, T=tetracycline), which mediates multiple drug resistance in typhoid (also called R factors).

As of 2014 some Enterococcus faecium and Pseudomonas aeruginosa strains are resistant to chloramphenicol. Some Veillonella spp. and Staphylococcus capitis strains have also developed resistance to chloramphenicol to varying degrees.[16]

The dose should be switched from the intravenous to the by mouth formulation as soon as possible.[20]

The most serious side effect of chloramphenicol treatment is aplastic anaemia. This effect is rare and sometimes fatal. The risk of AA is high enough that alternatives should be strongly considered. Treatments are available but expensive. No way exists to predict who may or may not get this side effect. The effect usually occurs weeks or months after treatment has been stopped, and a genetic predisposition may be involved. It is not known whether monitoring the blood counts of patients can prevent the development of aplastic anaemia, but patients are recommended to have a baseline blood count with a repeat blood count every few days while on treatment.[21] Chloramphenicol should be discontinued if the complete blood count drops. The highest risk is with oral chloramphenicol (affecting 1 in 24,000–40,000)[22] and the lowest risk occurs with eye drops (affecting less than one in 224,716 prescriptions).[23]

Thiamphenicol, a related compound with a similar spectrum of activity, is available in Italy and China for human use, and has never been associated with aplastic anaemia. Thiamphenicol is available in the U.S. and Europe as a veterinary antibiotic, but is not approved for use in humans.

Chloramphenicol may cause bone marrow suppression during treatment; this is a direct toxic effect of the drug on human mitochondria.[24] This effect manifests first as a fall in hemoglobin levels, which occurs quite predictably once a cumulative dose of 20 g has been given. The anaemia is fully reversible once the drug is stopped and does not predict future development of aplastic anaemia. Studies in mice have suggested existing marrow damage may compound any marrow damage resulting from the toxic effects of chloramphenicol.[25]

Leukemia, a cancer of the blood or bone marrow, is characterized by an abnormal increase of immature white blood cells. The risk of childhood leukemia is increased, as demonstrated in a Chinese case–control study,[26] and the risk increases with length of treatment.

Intravenous chloramphenicol use has been associated with the so-called gray baby syndrome.[27] This phenomenon occurs in newborn infants because they do not yet have fully functional liver enzymes (i.e. UDP-glucuronyl transferase), so chloramphenicol remains unmetabolized in the body.[28] This causes several symptoms, including low blood pressure and cyanosis. The condition can be prevented by using the medication at the recommended doses, and monitoring blood levels.[29][30][31]

Fever, macular and vesicular rashes, angioedema, urticaria, and anaphylaxis may occur. Herxheimer's reactions have occurred during therapy for typhoid fever.[32]

Headache, mild depression, mental confusion, and delirium have been described in patients receiving chloramphenicol. Optic and peripheral neuritis have been reported, usually following long-term therapy. If this occurs, the drug should be promptly withdrawn.[32]

Chloramphenicol is extremely lipid-soluble; it remains relatively unbound to protein and is a small molecule. It has a large apparent volume of distribution and penetrates effectively into all tissues of the body, including the brain. Distribution is not uniform, with highest concentrations found in the liver and kidney, with lowest in the brain and cerebrospinal fluid.[32] The concentration achieved in brain and cerebrospinal fluid is around 30 to 50% of the overall average body concentration, even when the meninges are not inflamed; this increases to as high as 89% when the meninges are inflamed.

Chloramphenicol increases the absorption of iron.[33]

Chloramphenicol passes into breast milk, so should therefore be avoided during breast feeding, if possible.[35]

Plasma levels of chloramphenicol must be monitored in neonates and patients with abnormal liver function. Plasma levels should be monitored in all children under the age of four, the elderly, and patients with kidney failure. Because efficacy and toxicity of chloramphenicol are associated with a maximum serum concentration, peak levels (one hour after the intravenous dose is given) should be 10–20 µg/ml with toxicity > 40 µg/ml; trough levels (taken immediately before a dose) should be 5–10 µg/ml.[36][37]

Administration of chloramphenicol concomitantly with bone marrow depressant drugs is contraindicated, although concerns over aplastic anaemia associated with ocular chloramphenicol have largely been discounted.[38]

Chloramphenicol is antagonistic with most cephalosporins and using both together should be avoided in the treatment of infections.[41]

Chloramphenicol is a bacteriostatic by inhibiting protein synthesis. It prevents protein chain elongation by inhibiting the peptidyl transferase activity of the bacterial ribosome. It specifically binds to A2451 and A2452 residues[42] in the 23S rRNA of the 50S ribosomal subunit, preventing peptide bond formation.[43] Chloramphenicol directly interferes with substrate binding in the ribosome, as compared to macrolides, which sterically block the progression of the growing peptide.[44][45][46]

Chloramphenicol was first isolated from Streptomyces venezuelae in 1947 and in 1949 a team of scientists at Parke-Davis including Mildred Rebstock published their identification of the chemical structure and their synthesis, making it the first antibiotic to be made instead of extracted from a micro-organism.[7]: 26 [47][48]

In 2007, the accumulation of reports associating aplastic anemia and blood dyscrasia with chloramphenicol eye drops lead to the classification of “probable human carcinogen” according to World Health Organization criteria, based on the known published case reports and the spontaneous reports submitted to the National Registry of Drug-Induced Ocular Side Effects.[49]

In many areas of the world an intravenous dose is about US$0.40–1.90.[9] In the United States it costs about $3.60 per dose in oral tablet form at wholesale.

In the UK, chloramphenicol ear and eye drops can be bought at a pharmacy and are not expensive.[50]

Chloramphenicol is available as a generic worldwide under many brandnames[51] and also under various generic names in eastern Europe and Russia, including chlornitromycin, levomycetin, and chloromycetin; the racemate is known as synthomycetin.[52] 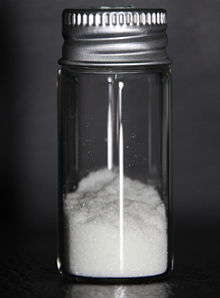 In molecular biology, chloramphenicol is prepared in ethanol.

Oily chloramphenicol (or chloramphenicol oil suspension) is a long-acting preparation of chloramphenicol first introduced by Roussel in 1954; marketed as Tifomycine, it was originally used as a treatment for typhoid. Roussel stopped production of oily chloramphenicol in 1995; the International Dispensary Association has manufactured it since 1998, first in Malta and then in India from December 2004.[55]

Oily chloramphenicol was first used to treat meningitis in 1975[56] and numerous studies since have demonstrated its efficacy.[57][58][59] It is the cheapest treatment available for meningitis (US$5 per treatment course, compared to US$30 for ampicillin and US$15 for five days of ceftriaxone). It has the great advantage of requiring only a single injection, whereas ceftriaxone is traditionally given daily for five days. This recommendation may yet change, now that a single dose of ceftriaxone (cost US$3) has been shown to be equivalent to one dose of oily chloramphenicol.[60]

Chloramphenicol is still used occasionally in topical preparations (ointments and eye drops) for the treatment of bacterial conjunctivitis. Isolated case reports of aplastic anaemia following use of chloramphenicol eyedrops exist, but the risk is estimated to be of the order of less than one in 224,716 prescriptions.[23] In Mexico, this is the treatment used prophylactically in newborns.

Although unpublished, recent research suggests chloramphenicol could also be applied to frogs to prevent their widespread destruction from fungal infections.[65] It has recently been discovered to be a life-saving cure for chytridiomycosis in amphibians.[66] Chytridiomycosis is a fungal disease, blamed for the extinction of one-third of the 120 frog species lost since 1980.