From WikiProjectMed
Jump to navigation Jump to search
Not to be confused with Budd–Chiari syndrome.

Chiari malformation (CM), also known as Arnold–Chiari malformation, is a group of deformities that involves the back of the skull and brain.[1] Symptoms may include headaches, neck pain, vision problems, world spinning, hearing loss and trouble with coordination, though some may have no symptoms.[1] Complications can include cerebellar tonsillar herniation, hydrocephalus, and syrinx.[1]

The cause is unknown, though a number of theories have been proposed.[1][2] The specific part of the brain involved are the cerebellum, pons, and medulla oblongata.[1] It is classified as type 0, I, II, III, or IV.[1][2] Diagnosis is suspected based on symptoms and confirmed by medical imaging.[1][2]

People with no symptoms may not require specific treatment.[1] Otherwise the primary treatment is decompressive surgery.[1] Pain may be managed with NSAIDs or a cervical collar.[1] Chiari I generally has a good prognosis while Chiari II has a 15% risk of death by age 3.[1]

Chiari I affects bout 0.5 to 3.5% of people, Chiari II occurs in about 0.4 per 1,000 births, and other types are less common.[1] Females may be affected more often than males.[2] It is named after the Austrian pathologist Hans Chiari who first described the condition in 1891 and the German pathologist Julius Arnold who further elaborated on it.[2][3]

Findings are due to brain stem and lower cranial nerve dysfunction. Onset of symptoms are less likely to be present during adulthood in most patients. Younger children generally have a substantially different presentation of clinical symptoms from older children. Younger children are more likely to have a more rapid neurological degeneration with profound brain stem dysfunction over several days.[citation needed]

The blockage of cerebrospinal fluid (CSF) flow may also cause a syrinx to form, eventually leading to syringomyelia. Central cord symptoms such as hand weakness, dissociated sensory loss, and, in severe cases, paralysis may occur.[9]

Syringomyelia is a chronic progressive degenerative disorder characterized by a fluid-filled cyst located in the spinal cord. Its symptoms include pain, weakness, numbness, and stiffness in the back, shoulders, arms or legs. Other symptoms include headaches, the inability to feel changes in the temperature, sweating, sexual dysfunction, and loss of bowel and bladder control. It is usually seen in the cervical region but can extend into the medulla oblongata and pons or it can reach downward into the thoracic or lumbar segments. Syringomyelia is often associated with type I Chiari malformation and is commonly seen between the C-4 and C-6 levels. The exact development of syringomyelia is unknown but many theories suggest that the herniated tonsils in type I Chiari malformations cause a "plug" to form, which does not allow an outlet of CSF from the brain to the spinal canal. Syringomyelia is present in 25% of patients with type I Chiari malformations.[10]

Foramen magnum (shown in red), the hole at the base of the skull.

The most widely accepted pathophysiological mechanism by which Chiari type I malformations occur is by a reduction or lack of development of the posterior fossa as a result of congenital or acquired disorders. Congenital causes include hydrocephalus, craniosynostosis (especially of the lambdoid suture), hyperostosis (such as craniometaphyseal dysplasia, osteopetrosis, erythroid hyperplasia), X-linked vitamin D-resistant rickets, and neurofibromatosis type I. Acquired disorders include space occupying lesions due to one of several potential causes ranging from brain tumors to hematomas.[11] Traumatic brain injury may cause delayed acquired Chiari malformation, but the pathophysiology of this is unknown.[12] Additionally, ectopia may be present but asymptomatic until a whiplash injury causes it to become symptomatic.[13]

Diagnosis is made through a combination of patient history, neurological examination, and medical imaging.[14] Magnetic resonance imaging (MRI) is considered the preferred imaging modality for Chiari malformation.[15] The MRI visualizes neural tissue such as the cerebellar tonsils and spinal cord as well as bone and other soft tissues. CT and CT myelography are other options and were used prior to the advent of MRI, unfortunately the resolution of CT based modalities do not characterize syringomyelia and other neural abnormalities as well.[citation needed]

By convention, the cerebellar tonsil position is measured relative to the basion-opisthion line, using sagittal T1 MRI images or sagittal CT images.[16] The selected cutoff distance for abnormal tonsil position is somewhat arbitrary, as not every person will be symptomatic at a certain amount of tonsil displacement, and the probability of symptoms and syrinx increases with greater displacement; however, greater than 5 mm is the most frequently cited cutoff number, though some consider 3–5 mm to be "borderline,"; pathological signs and syrinx may occur beyond that distance.[16][17][18] One study showed little difference in cerebellar tonsil position between standard recumbent MRI and upright MRI for patients without a history of whiplash injury.[13] Neuroradiological investigation is used to first rule out any intracranial condition that could be responsible for tonsillar herniation. Neuroradiological diagnostics evaluate the severity of crowding of the neural structures within the posterior cranial fossa and their pressure against the foramen magnum. Chiari 1.5 is a term used when both brainstem and tonsillar herniation through the foramen magnum are present.[19]

The diagnosis of a Chiari II malformation can be made prenatally, through ultrasound.[20]

In the late 19th century, Austrian pathologist Hans Chiari described seemingly related anomalies of the hindbrain, the so-called Chiari malformations I, II and III. Later, other investigators added a fourth (Chiari IV) malformation. The scale of severity is rated I – IV, with IV being the most severe. Types III and IV are very rare.[21] Since Dr. Chiari's original descriptions Chiari 0, 1.5, 3.5, and 5 have been described in the medical literature.[22][19][23][24] 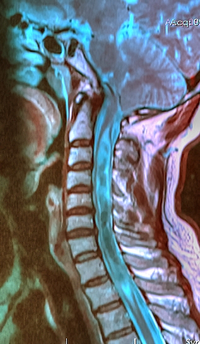 In Pseudo-Chiari Malformation, leaking of CSF may cause displacement of the cerebellar tonsils and similar symptoms sufficient to be mistaken for a Chiari I malformation.[44]

While there is no current cure, the treatments for Chiari malformation are surgery and management of symptoms, based on the occurrence of clinical symptoms rather than the radiological findings. The presence of a syrinx is known to give specific signs and symptoms that vary from dysesthetic sensations to algothermal dissociation to spasticity and paresis. These are important indications that decompressive surgery is needed for patients with Chiari Malformation Type II. Type II patients have severe brain stem damage and rapidly diminishing neurological response.[45][46]

Decompressive surgery[47] involves removing the lamina of the first and sometimes the second or third cervical vertebrae and part of the occipital bone of the skull to relieve pressure. The flow of spinal fluid may be augmented by a shunt. Since this surgery usually involves the opening of the dura mater and the expansion of the space beneath, a dural graft is usually applied to cover the expanded posterior fossa.[citation needed]

A small number of neurological surgeons[who?] believe that detethering the spinal cord as an alternate approach relieves the compression of the brain against the skull opening (foramen magnum), obviating the need for decompression surgery and associated trauma. However, this approach is significantly less documented in the medical literature, with reports on only a handful of patients. The alternative spinal surgery is also not without risk.[citation needed]

Complications of decompression surgery can arise. They include bleeding, damage to structures in the brain and spinal canal, meningitis, CSF fistulas, occipito-cervical instability and pseudomeningeocele. Rare post-operative complications include hydrocephalus and brain stem compression by retroflexion of odontoid. Also, an extended CVD created by a wide opening and big duroplasty can cause a cerebellar "slump". This complication needs to be corrected by cranioplasty.[45]

Congenital Chiari I malformation, defined as tonsilar herniations of 3 to 5 mm or greater, was previously believed to be in the range of one per 1000 births, but is likely much higher.[32][48] Women are three times more likely than men to have a congenital Chiari malformation.[49] Type II malformations are more prevalent in people of Celtic descent.[48] A study using upright MRI found cerebellar tonsillar ectopia in 23% of adults with headache from motor-vehicle-accident head trauma. Upright MRI was more than twice as sensitive as standard MRI, likely because gravity affects cerebellar position.[13]

Cases of congenital Chiari malformation may be explained by evolutionary and genetic factors. Typically, an infant's brain weighs around 400g at birth and triples to 1100-1400g by age 11. At the same time the cranium triples in volume from 500 cm3 to 1500 cm3 to accommodate the growing brain.[50] During human evolution, the skull underwent numerous changes to accommodate the growing brain. The evolutionary changes included increased size and shape of the skull, decreased basal angle and basicranial length. These modifications resulted in significant reduction of the size of the posterior fossa in modern humans. In normal adults, the posterior fossa comprises 27% of the total intracranial space, while in adults with Chiari Type I, it is only 21%.[51] H. neanderthalensis had platycephalic (flattened) skulls. Some cases of Chiari are associated with platybasia (flattening of the skull base).[52]

The history of Chiari malformation is described below and categorized by the year:

The condition was brought to the mainstream on the series CSI: Crime Scene Investigation in the tenth-season episode "Internal Combustion" on February 4, 2010.[55] Chiari malformation was briefly mentioned on the medical drama House M.D. in the fifth-season episode "House Divided",[citation needed] and it was the focus of the sixth-season episode "The Choice." It is also the focus of Private Practice Season 4 episode 4, where a pregnant woman is diagnosed with it. It was also mentioned in the medical drama A Gifted Man, in the first-season episode "In Case of Separation Anxiety".[56] It is also featured in the 3rd and 4th episode of the 7th season of the series Rizzoli & Isles where Dr. Maura Isles is diagnosed with the condition.[57][58][59]