From WikiProjectMed
Jump to navigation Jump to search
For other uses, see Hypoxia (disambiguation).

Cerebral hypoxia is reduced oxygen supply to the brain; despite adequate blood flow.[1] In contrast "anoxia" is the complete lack of oxygen.[2] Symptoms may vary from poor judgement, memory loss, and poor coordination to coma, seizure, and brain death.[1]

Treatment depends on the underlying cause, but is generally supportive in nature.[1] This may include mechanical ventilation, intravenous fluids, medications to decrease seizures, and medications to support blood pressure.[1] Outcomes depend on the degree of brain damage and may not be clear for 72 hours.[1][2] Of those in a coma, about 30% regain consciousness, 10% remain in a coma, and 60% die.[2] Of those who regain consciousness, movement disorders and cognitive dysfunction are common.[2]

Hypoxic brain injury affects more than half of people who have a cardiac arrest.[2] When it occurs around the time of birth, known as birth asphyxia, it may result in neonatal hypoxic-ischemic encephalopathy.[4] This affects about 1.5 per 1,000 live births in the developing world.[5] In the developing world rates vary from 2 to 27 per 1,000 live births.[6]

The brain requires approximately 3.3 ml of oxygen per 100 g of brain tissue per minute. Initially the body responds to lowered blood oxygen by redirecting blood to the brain and increasing cerebral blood flow. Blood flow may increase up to twice the normal flow but no more. If the increased blood flow is sufficient to supply the brain's oxygen needs then no symptoms will result.[7]

However, if blood flow cannot be increased or if doubled blood flow does not correct the problem, symptoms of cerebral hypoxia will begin to appear. Mild symptoms include difficulties with complex learning tasks and reductions in short-term memory. If oxygen deprivation continues, cognitive disturbances, and decreased motor control will result.[7] The skin may also appear bluish (cyanosis) and heart rate increases. Continued oxygen deprivation results in fainting, long-term loss of consciousness, coma, seizures, cessation of brain stem reflexes, and brain death.[8]

Cerebral hypoxia refers to oxygen levels in brain tissue, not blood. Blood oxygenation will usually appear normal in cases of hypemic, ischemic, and hystoxic cerebral hypoxia. Even in hypoxic hypoxia blood measures are only an approximate guide; the oxygen level in the brain tissue will depend on how the body deals with the reduced oxygen content of the blood. 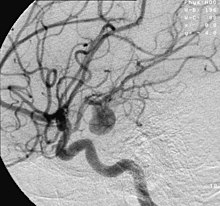 Aneurysm in a cerebral artery, one cause of hypoxic anoxic injury (HAI).

Cerebral hypoxia can be caused by any event that severely interferes with the brain's ability to receive or process oxygen. This event may be internal or external to the body. Mild and moderate forms of cerebral hypoxia may be caused by various diseases that interfere with breathing and blood oxygenation. Severe asthma and various sorts of anemia can cause some degree of diffuse cerebral hypoxia. Other causes include status epilepticus, work in nitrogen-rich environments, ascent from a deep-water dive, flying at high altitudes in an unpressurized cabin without supplemental oxygen, and intense exercise at high altitudes prior to acclimatization.

Hypoxic-anoxic events may affect the fetus at various stages of fetal development, during labor and delivery and in the postnatal period. Problems during pregnancy may include preeclampsia, maternal diabetes with vascular disease, congenital fetal infections, drug/alcohol abuse, severe fetal anemia, cardiac disease, lung malformations, or problems with blood flow to the placenta.

Problems during labor and delivery can include umbilical cord occlusion, torsion or prolapse, rupture of the placenta or uterus, excessive bleeding from the placenta, abnormal fetal position such as the breech position, prolonged late stages of labor, or very low blood pressure in the mother. Problems after delivery can include severe prematurity, severe lung or heart disease, serious infections, trauma to the brain or skull, congenital malformations of the brain or very low blood pressure in the baby[17] and due to suffocation in cases of Münchausen syndrome by proxy.[18]

The severity of a neonatal hypoxic-ischaemic brain injury may be assessed using Sarnat staging, which is based on clinical presentation and EEG findings, and also using MRI.[19]

Main article: Mechanism of anoxic depolarization in the brain 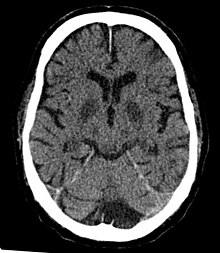 CT in a person after generalized hypoxia.

Cerebral hypoxia can also be classified by the cause of the reduced brain oxygen:[23]

For newborn infants starved of oxygen during birth there is now evidence that hypothermia therapy for neonatal encephalopathy applied within 6 hours of cerebral hypoxia effectively improves survival and neurological outcome.[25] In adults, however, the evidence is less convincing and the first goal of treatment is to restore oxygen to the brain. The method of restoration depends on the cause of the hypoxia. For mild-to-moderate cases of hypoxia, removal of the cause of hypoxia may be sufficient. Inhaled oxygen may also be provided. In severe cases treatment may also involve life support and damage control measures.

A deep coma will interfere with the body's breathing reflexes even after the initial cause of hypoxia has been dealt with; mechanical ventilation may be required. Additionally, severe cerebral hypoxia causes an elevated heart rate, and in extreme cases the heart may tire and stop pumping. CPR, defibrilation, epinephrine, and atropine may all be tried in an effort to get the heart to resume pumping.[9] Severe cerebral hypoxia can also cause seizures, which put the patient at risk of self-injury, and various anti-convulsant drugs may need to be administered before treatment.

There has long been a debate over whether newborn infants with cerebral hypoxia should be resuscitated with 100% oxygen or normal air.[26] It has been demonstrated that high concentrations of oxygen lead to generation of oxygen free radicals, which have a role in reperfusion injury after asphyxia.[27] Research by Ola Didrik Saugstad and others led to new international guidelines on newborn resuscitation in 2010, recommending the use of normal air instead of 100% oxygen.[28][29]

Brain damage can occur both during and after oxygen deprivation. During oxygen deprivation, cells die due to an increasing acidity in the brain tissue (acidosis). Additionally, during the period of oxygen deprivation, materials that can easily create free radicals build up. When oxygen enters the tissue these materials interact with oxygen to create high levels of oxidants. Oxidants interfere with the normal brain chemistry and cause further damage (this is known as "reperfusion injury").

Techniques for preventing damage to brain cells are an area of ongoing research. Hypothermia therapy for neonatal encephalopathy is the only evidence-supported therapy, but antioxidant drugs, control of blood glucose levels, and hemodilution (thinning of the blood) coupled with drug-induced hypertension are some treatment techniques currently under investigation.[30] Hyperbaric oxygen therapy is being evaluated with the reduction in total and myocardial creatine phosphokinase levels showing a possible reduction in the overall systemic inflammatory process.[31]

In severe cases it is extremely important to act quickly. Brain cells are very sensitive to reduced oxygen levels. Once deprived of oxygen they will begin to die off within five minutes.[30]

Mild and moderate cerebral hypoxia generally has no impact beyond the episode of hypoxia; on the other hand, the outcome of severe cerebral hypoxia will depend on the success of damage control, amount of brain tissue deprived of oxygen, and the speed with which oxygen was restored.

If cerebral hypoxia was localized to a specific part of the brain, brain damage will be localized to that region. A general consequence may be epilepsy. The long-term effects will depend on the purpose of that portion of the brain. Damage to the Broca's area and the Wernicke's area of the brain (left side) typically causes problems with speech and language. Damage to the right side of the brain may interfere with the ability to express emotions or interpret what one sees. Damage on either side can cause paralysis of the opposite side of the body.

The effects of certain kinds of severe generalized hypoxias may take time to develop. For example, the long-term effects of serious carbon monoxide poisoning usually may take several weeks to appear. Recent research suggests this may be due to an autoimmune response caused by carbon monoxide-induced changes in the myelin sheath surrounding neurons.[32]

If hypoxia results in coma, the length of unconsciousness is often indicative of long-term damage. In some cases coma can give the brain an opportunity to heal and regenerate,[33] but, in general, the longer a coma, the greater the likelihood that the person will remain in a vegetative state until death.[10] Even if the patient wakes up, brain damage is likely to be significant enough to prevent a return to normal functioning.

Long-term comas can have a significant impact on a patient's families.[34] Families of coma victims often have idealized images of the outcome based on Hollywood movie depictions of coma.[35] Adjusting to the realities of ventilators, feeding tubes, bedsores, and muscle wasting may be difficult.[36] Treatment decision often involve complex ethical choices and can strain family dynamics.[37]