From WikiProjectMed
Jump to navigation Jump to search
Not to be confused with "South American blastomycosis" or paracoccidioidomycosis.

Blastomycosis, sometimes called Gilchrist's disease, is a fungal infection, typically of the lungs, which can spread to brain, stomach, intestine and skin, where it appears as crusting purplish warty plaques with a roundish bumpy edge and central depression.[1] Around half have symptoms which may include fever, cough, night sweats, muscle pains, weight loss, chest pain, and feeling tired.[3] These symptoms usually develop between three weeks and three months after breathing in the spores.[3] In those with weak immune systems, the disease can spread to other areas of the body and become widespread.[5]

It is caused by breathing in spores of Blastomyces dermatitidis, a common mold, which generally affects people who cannot fight infection themselves due to their medication or medical condition.[1][6] B. dermatitis is found in soil and decaying organic matter like wood or leaves.[7] Participating in outdoor activities like hunting or camping in wooded areas increases the risk of developing blastomycosis.[8]

There is no vaccine, but the disease can be prevented by not disturbing the soil.[8] Treatment is with itraconazole for mild or moderate disease and amphotericin B for severe disease.[7] With both, the duration of treatment is 6–12 months.[9]

Overall, 4-6% of people who develop blastomycosis die; however, if the central nervous system is involved, this rises to 18%. People with AIDS or on medications that suppress the immune system have the highest risk of death at 25-40%.[10]

Blastomycosis is most common in the eastern United States, especially along the Ohio river, Mississippi River valleys, the Great Lakes, and the St. Lawrence River.[1] It is also endemic to some parts of Canada, including Quebec, Ontario, and Manitoba.[7] In these areas, there are about 1 to 2 cases per 100,000 per year.[11] Blastomycosis was first described by Thomas Casper Gilchrist in 1894.[12]

The severity of symptoms depends on a person's immune status; less than 50% of healthy people with blastomycosis have symptoms, while immunocompromised patients can have the disease spread beyond the lungs to other organs like the skin and bones.[5]

Blastomycosis can present in one of the following ways:[citation needed]

In endemic areas, the fungus lives in soil and rotten wood near lakes and rivers.[13] Although it has never been directly observed growing in nature, it is thought to grow there as a cottony white mold, similar to the growth seen in artificial culture at 25 °C. The moist, acidic soil in the surrounding woodland harbors the fungus.

Blastomycosis is primarily a lung infection in about 70% of cases.[14] The onset is relatively slow and symptoms are suggestive of pneumonia, often leading to initial treatment with antibacterials. Occasionally, if a lesion is seen on X-ray in a cigarette smoker, the disease may be misdiagnosed as carcinoma, leading to swift excision of the pulmonary lobe involved. Upper lung lobes are involved somewhat more frequently than lower lobes.[14] If untreated, many cases progress over a period of months to years to become disseminated blastomycosis. In these cases, the large Blastomyces yeast cells translocate from the lungs and are trapped in capillary beds elsewhere in the body, where they cause lesions. The skin is the most common organ affected, being the site of lesions in approximately 60% of cases.[14] The signature image of blastomycosis in textbooks is the indolent, verrucous or ulcerated dermal lesion seen in disseminated disease. Osteomyelitis is also common (12–60% of cases). Other recurring sites of dissemination are the genitourinary tract (kidney, prostate, epididymis; collectively ca. 25% of cases) and the brain (3–10% of cases).[14] 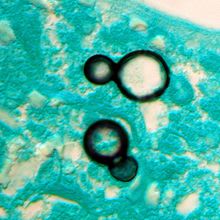 Inhaled conidia of B. dermatitidis are phagocytosed by neutrophils and macrophages in alveoli. Some of these escape phagocytosis and transform into yeast phase rapidly. Having thick walls, these are resistant to phagocytosis and express glycoprotein, BAD-1, which is a virulence factor as well as an epitope. In lung tissue, they multiply and may disseminate through blood and lymphatics to other organs, including the skin, bone, genitourinary tract, and brain. The incubation period is 30 to 100 days, although infection can be asymptomatic.[citation needed]

Once suspected, the diagnosis of blastomycosis can usually be confirmed by demonstration of the characteristic broad based budding organisms in sputum or tissues by KOH prep, cytology, or histology.[16] Tissue biopsy of skin or other organs may be required in order to diagnose extra-pulmonary disease. Blastomycosis is histologically associated with granulomatous nodules. Commercially available urine antigen testing appears to be quite sensitive in suggesting the diagnosis in cases where the organism is not readily detected. While culture of the organism remains the definitive diagnostic standard, its slow growing nature can lead to delays in treatment of up to several weeks. However, sometimes blood and sputum cultures may not detect blastomycosis.[17]

Itraconazole given orally is the treatment of choice for most forms of the disease.[4] Ketoconazole may also be used. Cure rates are high, and the treatment over a period of months is usually well tolerated. Amphotericin B is considerably more toxic, and is usually reserved for immunocompromised patients who are critically ill and those with central nervous system disease. Those who cannot tolerate deoxycholate formulation of Amphotericin B can be given lipid formulations. Fluconazole has excellent CNS penetration and is useful where there is CNS involvement after initial treatment with Amphotericin B.

Distribution of blastomycosis in North America based on the map given by Kwon-Chung and Bennett,[14] with modifications made according to case reports from a series of additional sources.[18][19][20][21][22][23][24]

The study of outbreaks as well as trends in individual cases of blastomycosis has clarified a number of important matters. Some of these relate to the ongoing effort to understand the source of infectious inoculum of this species, while others relate to which groups of people are especially likely to become infected. Human blastomycosis is primarily associated with forested areas and open watersheds;[14][31][32][33] It primarily affects otherwise healthy, vigorous people, mostly middle-aged,[34] who acquire the disease while working or undertaking recreational activities in sites conventionally considered clean, healthy and in many cases beautiful.[14][25] Repeatedly associated activities include hunting, especially raccoon hunting,[35] where accompanying dogs also tend to be affected, as well as working with wood or plant material in forested or riparian areas,[14][36] involvement in forestry in highly endemic areas,[37] excavation,[28] fishing[34][38] and possibly gardening and trapping.[19][28]

There is also a developing profile of urban and other domestic blastomycosis cases, beginning with an outbreak tentatively attributed to construction dust in Westmont, Illinois.[39] The city of Rockford, Illinois, was also documented as a hyperendemic area based on incidence rates as high as 6.67 per 100,000 population for some areas of the city. Though proximity to open watersheds was linked to incidence in some areas,[33] suggesting that outdoor activity within the city may be connected to many cases, there is also an increasing body of evidence that even the interiors of buildings may be risk areas. An early case concerned a prisoner who was confined to prison during the whole of his likely blastomycotic incubation period.[40] An epidemiological survey found that although many patients who contracted blastomycosis had engaged in fishing, hunting, gardening, outdoor work and excavation, the most strongly linked association in patients was living or visiting near waterways.[38] Based on a similar finding in a Louisiana study, it has been suggested that place of residence might be the most important single factor in blastomycosis epidemiology in north central Wisconsin.[41] Follow-up epidemiological and case studies indicated that clusters of cases were often associated with particular domiciles, often spread out over a period of years, and that there were uncommon but regularly occurring cases in which pets kept mostly or entirely indoors, in particular cats, contracted blastomycosis.[42][43] The occurrence of blastomycosis, then, is an issue strongly linked to housing and domestic circumstances.[citation needed]

Seasonality and weather also appear to be linked to contraction of blastomycosis. Many studies have suggested an association between blastomycosis contraction and cool to moderately warm, moist periods of the spring and autumn[14][19][44] or, in relatively warm winter areas.[45] However, the entire summer or a known summer exposure date is included in the association in some studies.[34][46] Occasional studies fail to detect a seasonal link.[47] In terms of weather, both unusually dry weather[48] and unusually moist weather[49] have been cited. The seemingly contradictory data can most likely be reconciled by proposing that B. dermatitidis prospers in its natural habitats in times of moisture and moderate warmth, but that inoculum formed during these periods remains alive for some time and can be released into the air by subsequent dust formation under dry conditions. Indeed, dust per se or construction potentially linked to dust has been associated with several outbreaks[15][39][50] The data, then, tend to link blastomycosis to all weather, climate and atmospheric conditions except freezing weather, periods of snow cover, and extended periods of hot, dry summer weather in which soil is not agitated.

Sex is another factor inconstantly linked to contraction of blastomycosis: though many studies show more men than women affected,[14][22] some show no sex-related bias.[19][38] As mentioned above, most cases are in middle aged adults, but all age groups are affected, and cases in children are not uncommon.[14][19][22]

Ethnic group or race is frequently investigated in epidemiological studies of blastomycosis, but is potentially profoundly conflicted by differences in residence and in quality and accessibility of medical care, factors that have not been stringently controlled for to date. In the USA, a disproportionately high incidence and/or mortality rate is occasionally shown for blacks;[26][27][51][52] whereas aboriginals in Canada are disproportionately linked to blastomycosis in some studies[19][53] but not others.[18] Incidence in aboriginal children may be unusually high.[19] The Canadian data in some areas may be confounded or explained by the tendency to establish aboriginal communities in wooded, riparian, northern areas corresponding to the core habitat of B. dermatitidis, often with known B. dermatitidis habitats such as woodpiles and beaver constructions in the near vicinity.[citation needed]

There are a very small number of cases of human-to-human transmission of B. dermatitidis related to dermal contact[54] or sexual transmission of disseminated blastomycosis of the genital tract among spouses.[14]

Blastomycosis was first described by Thomas Casper Gilchrist in 1894; because of this, it is sometimes called "Gilchrist's disease".[12] It is also sometimes referred to as Chicago Disease. Other names for blastomycosis include North American blastomycosis, and blastomycetic dermatitis.[55]

Among a skeletal series of Late Woodland Native Americans and later burial populations (the Mississippians, AD 900-1673) Dr. Jane Buikstra found evidence for what may have been an epidemic of a serious spinal disease in adolescents and young adults. Several of the skeletons showed lesions in the spinal vertebrae in the lower back. There are two modern diseases that produce lesions in the bone similar to the ones Dr. Buikstra found in these prehistoric specimens - spinal TB and blastomycosis. The bony lesions in these two diseases are practically identical. Blastomycosis seems more probable as these young people in Late Woodland and Mississippian times may have been afflicted because they were spending more time cultivating plants than their Middle Woodland predecessors had done. If true, it would be another severe penalty Late Woodland people had to pay as they shifted to agriculture as a way of life, and it would be a contributing factor to shortening their lifespans compared to those of the Middle Woodland people.[56]

Blastomycosis also affects an indefinitely broad range of mammalian hosts, and dogs in particular are a highly vulnerable sentinel species.[14] The disease generally begins with acute respiratory symptoms and rapidly progresses to death. Cats are the animals next most frequently detected as infected.[42]