Bismuth subsalicylate, sold under the brand name Pepto-Bismol among others, is an medication used for diarrhea and heartburn.[1] Its use for heartburn; however, is not generally recommended in the United Kingdom.[2] It is also used along with other medications to treat Helicobacter pylori infection.[1][2] It is taken by mouth either as a liquid or a tablet.[1][2]

Common side effects include a black tongue or dark stool.[1] Severe side effects may include Reye's syndrome and neurological problems.[1] It should not be used in people who are allergic to aspirin and in large doses may result in salicylate poisoning.[1][2] Use is the last third of pregnancy may harm the baby.[1] It works by forming a protective coating inside the stomach.[3]

Bismuth subsalicylate came into medical use in the 1910s.[3] It is available as a generic medication and over the counter.[4] While it is often described as an "antacid", it does not have antacid properties.[4] In the United States 30 tabs of 262 mg costs about 11 USD.[5]

Bismuth subsalicylate is used along with other medications to treat Helicobacter pylori infection.[1][2]

While it is used for heartburn, such use is not recommended in the United Kingdom due to side effects.[1][2] Evidence for benefit in heartburn without stomach ulcers is unclear.[1]

While it has been used for traveler's diarrhea, to be useful for this purpose requires high doses and therefore such use is controversial.[4]

There are some side effects. It can cause a black tongue and black stools in some users of the drug when it combines with trace amounts of sulfur in saliva and the colon to form bismuth sulfide.[6] Bismuth sulfide is a highly insoluble black salt, and the discoloration seen is temporary and harmless.

Long-term use (greater than 6 weeks) may lead to accumulation and toxicity.[7] Some of the risks of salicylism can apply to the use of bismuth subsalicylate.[8][9][10]

Children should not take medication with bismuth subsalicylate while recovering from influenza or chicken pox, as there is an association between the use of salicylate-containing medications during certain viral infections and the onset of Reye syndrome.[11] For the same reason, it is typically recommended that nursing mothers not use medication containing bismuth subsalicylate because small amounts of the medication are excreted in human breast milk, and these pose a theoretical risk of Reye's syndrome to nursing children.[12]

The British National Formulary does not recommend bismuth-containing medications as an "antacid" (unless chelated), cautioning that absorbed bismuth can be neurotoxic, causing encephalopathy, and it can be constipating.[13]

The means by which it works is not well documented. It is thought to be some combination of the following:[14]

Organobismuth compounds have historically been used in growth media for selective isolation of microorganisms. Such salts have been shown to inhibit proliferation of Helicobacter pylori, other enteric bacteria, and some fungi.[16]

Bismuth slag from decomposition of Pepto-Bismol

It has the chemical formula of C7H5BiO4,[17] and it is a colloidal substance obtained by hydrolysis of bismuth salicylate (Bi(C6H4(OH)CO2)3).

Bismuth subsalicylate is the only active ingredient in an over-the-counter drug that can leave a shiny metal oxide slag behind after being completely burnt with a blow torch.[18] 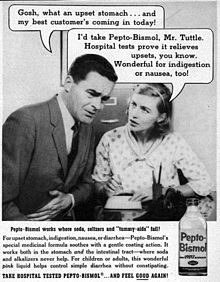 1957 Life magazine ad for the product

While bismuth salts were in use in Europe by the late 1700s, the combination of bismuth subsalicylate and zinc salts for astringency with salol (phenyl salicilate) appears to have begun in the US in the early 1900s as a remedy for life-threatening diarrhea in infants with cholera. At first sold directly to physicians, it was first marketed as Bismosal in 1918.[19]

Pepto-Bismol began being sold in 1900[19] or 1901[20] by a doctor in New York. It was originally sold as a remedy for infant diarrhea by Norwich Pharmacal Company under the name "Bismosal: Mixture Cholera Infantum".[19] It was renamed Pepto-Bismol in 1919. Norwich Eaton Pharmaceuticals was acquired by Procter and Gamble in 1982.[21]

As of 1946 and 1959, Canadian advertisements placed by Norwich show the product as Pepto-Besmal both in graphic and text.[22][23]

Pepto-Bismol is an over-the-counter drug currently produced by the Procter & Gamble company in the United States, Canada and the United Kingdom. Pepto-Bismol is made in chewable tablets[24] and swallowable caplets,[25] but it is best known for its original formula, which is a thick liquid. This original formula is a medium pink in color, with a teaberry (methyl salicylate) flavor.[26]

Salicylates are very toxic to cats, and thus bismuth subsalicylate should not be administered to cats.[27]