Benzoyl peroxide (BPO or (BzO)2) is a medication and industrial chemical.[3] As a medication, it is used to treat mild to moderate acne.[4] For more severe cases, it may be used with other treatments.[4] Some versions are sold mixed with antibiotics such as clindamycin.[5] Other uses include bleaching flour, hair bleaching, teeth whitening, and textile bleaching.[6][7][8] It is also used in the plastic industry.[3]

Common side effects are skin irritation, dryness, or peeling.[4][9] Use in pregnancy is of unclear safety.[10] Benzoyl peroxide is in the peroxide family of chemicals.[7] When used for acne, it works by killing bacteria.[6]

Benzoyl peroxide was first made in 1905 and came into medical use in the 1930s.[6] It is on the World Health Organization's List of Essential Medicines.[11] Benzoyl peroxide is available as a generic medication and over the counter.[9] In the United Kingdom, 150 ml of a 10% solution cost the NHS about £4.[5] In the United States, a month of treatment costs less than US$25.[9] 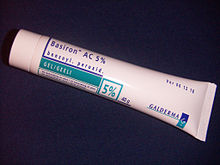 Benzoyl peroxide is used in dentistry as a tooth whitening product.

In the U.S., the typical concentration for benzoyl peroxide is 2.5% to 10% for both prescription and over-the-counter drug preparations that are used in treatment for acne.[citation needed]The defined daily dose is not established[2] 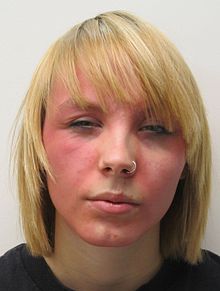 Skin irritation due to benzoyl peroxide

Application of benzoyl peroxide to the skin may result in redness, burning, and irritation. This side effect is dose-dependent.[4][9]

Because of these possible side effects, it is recommended to start with a low concentration and build up as appropriate, as the skin gradually develops tolerance to the medication. Skin sensitivity typically resolves after a few weeks of continuous use.[14][15] Irritation can also be reduced by avoiding harsh facial cleansers and wearing sunscreen prior to sun exposure.[15]

The safety of BPO use during pregnancy is unclear.[19]

Concentrated benzoyl peroxide is potentially explosive[20] like other organic peroxides, and can cause fires without external ignition. The hazard is acute for the pure material, so the compound is generally used as a solution or a paste. For example, cosmetics contain only a small percentage of benzoyl peroxide and pose no explosion risk.

Benzoyl peroxide breaks down in contact with skin, producing benzoic acid and oxygen, neither of which is very toxic.[21]

The carcinogenic potential of benzoyl peroxide has been investigated. A 1981 study published in the journal Science found that although benzoyl peroxide is not a carcinogen, it does promote cell growth when applied to an initiated tumor. The study concluded, "caution should be recommended in the use of this and other free radical-generating compounds".[22]

A 1999 IARC review of carcinogenicity studies found no convincing evidence linking BPO acne medication to skin cancers in humans. However, some animal studied found that the compound could act as a carcinogen and enhance the effect of known carcinogens.[23]

In a 1977 study using a human maximization test, 76% of subjects acquired a contact sensitization to benzoyl peroxide. Formulations of 5% and 10% were used.[24]

The U.S. National Institute for Occupational Safety and Health has developed criteria for a recommended standard for occupational exposure to benzoyl peroxide.[25] 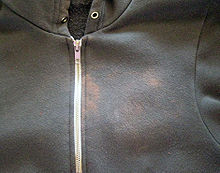 A bleached fabric stain caused by contact with benzoyl peroxide.

Contact with fabrics or hair, such as from still-moist acne medication, can cause permanent color dampening almost immediately. Even secondary contact can cause bleaching; for example, contact with a towel that has been used to wash off benzoyl peroxide-containing hygiene products.[26]

Classically, benzoyl peroxide is thought to have a three-fold activity in treating acne. It is sebostatic, comedolytic, and inhibits growth of Cutibacterium acnes the main bacterium associated with acne.[27][12] In general, acne vulgaris is a hormone-mediated inflammation of sebaceous glands and hair follicles. Hormone changes cause an increase in keratin and sebum production, leading to blocked drainage. C. acnes has many lytic enzymes that break down the proteins and lipids in the sebum, leading to an inflammatory response. The free-radical reaction of benzoyl peroxide can break down the keratin, therefore unblocking the drainage of sebum (comedolytic). It can cause nonspecific peroxidation of C. acnes, making it bactericidal,[6] and it was thought to decrease sebum production, but disagreement exists within the literature on this.[14][27]

Some evidence suggests that benzoyl peroxide has an anti-inflammatory effect as well. In micromolar concentrations it prevents neutrophils from releasing reactive oxygen species, part of the inflammatory response in acne.[14]

The original 1858 synthesis by Liebig reacted benzoyl chloride with barium peroxide,[28] a reaction that probably follows this equation:

The symbol • indicates that the products are radicals; i.e., they contain at least one unpaired electron. Such species are highly reactive. The homolysis is usually induced by heating. The half-life of benzoyl peroxide is one hour at 92 °C. At 131 °C, the half-life is one minute.[29]

Benzoyl peroxide was first prepared and described by Liebig in 1858.[28] It was the first organic peroxide prepared by intentional synthesis.

In 1901, J. H. Kastle and his graduate student A. S. Loevenhart observed that the compound made the tincture of guaiacum tincture turn blue, a sign of oxygen being released.[30] Around 1905, Loevenhart reported on the successful use of BPO to treat various skin conditions, including burns, chronic varicose leg tumors, and tinea sycosis. He also reported animal experiments that showed the relatively low toxicity of the compound.[31][6][32]

Treatment with benzoylperoxide was proposed for wounds by Lyon and Reynolds in 1929, and for sycosis vulgaris and acne varioliformis by Peck and Chagrin in 1934.[32] However, preparations were often of questionable quality.[6] It was officially approved for the treatment of acne in the US in 1960.[6]

Benzoyl peroxide is one of the most important organic peroxides in terms of applications and the scale of its production. It is often used as a convenient oxidant in organic chemistry.[citation needed]

Like most peroxides, is a powerful bleaching agent. It has been used for the bleaching of flour, fats, oils, waxes, and cheeses, as well as a stain remover.[33]

Benzoyl peroxide is also used as a radical initiator to induce chain-growth polymerization reactions,[34] such as for polyester and poly(methyl methacrylate) (PMMA) resins and dental cements and restoratives.[23] It is the most important among the various organic peroxides used for this purpose, a relatively safe alternative to the much more hazardous methyl ethyl ketone peroxide.[35][36] It is also used in rubber curing and as a finishing agent for some acetate yarns.[23]