Balantidiasis is a protozoan infection caused by infection with Balantidium coli.[1]

Usually asymptomatic in immunocompetent individuals, but the symptoms of balantidiasis include:[citation needed]

The most common ones are intermittent diarrhea and constipation or inflammation of the colon combined with abdominal cramps and bloody stools.[citation needed]

Balantidium is the only ciliated protozoan known to infect humans. Balantidiasis is a zoonotic disease and is acquired by humans via the feco-oral route from the normal host, the pig, where it is asymptomatic. “Contaminated water is the most common mechanism of transmission. Equally dangerous, however, is the ingestion of contaminated food.”[2] 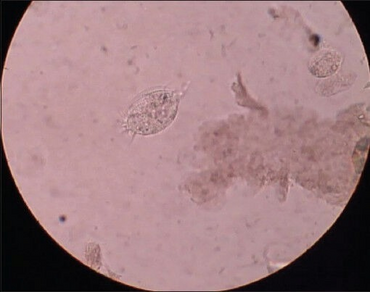 Balantidium coli exists in either of two developmental stages: trophozoites and cysts.[3] In the trophozoite form, they can be oblong or spherical, and are typically 30 to 150 µm in length and 25 to 120 µm in width.[4] It is its size at this stage that allows Balantidium coli to be characterized as the largest protozoan parasite of humans.[3] Trophozoites possess both a macronucleus and a micronucleus, and both are usually visible.[3] The macronucleus is large and sausage-shaped while the micronucleus is less prominent.[4] At this stage, the organism is not infective but it can replicate by transverse binary fission.[3]

In its cyst stage, the parasite takes on a smaller, more spherical shape, with a diameter of around 40 to 60 µm.[4] Unlike the trophozoite, whose surface is covered only with cilia, the cyst form has a tough wall made of one or more layers. The cyst form also differs from the trophozoite form because it is non-motile and does not undergo reproduction. Instead, the cyst is the form that the parasite takes when it causes infection.[3]

A trophozoite of Balantidium coli

The first study to generate balantidiasis in humans was undertaken by Cassagrandi and Barnagallo in 1896.[8] However, this experiment was not successful in creating an infection and it was unclear whether Balantidium coli was the actual parasite used.[8] The first case of balantidiasis in the Philippines, where it is the most common, was reported in 1904.[9][4] Currently, Balantidium coli is distributed worldwide but less than 1% of the human population is infected.[10][4] Pigs are a major reservoir of the parasite, and infection of humans occurs more frequently in areas where pigs comingle with people.[10] This includes places like the Philippines, as previously mentioned, but also includes countries such as Bolivia and Papua New Guinea.[10][11] But pigs are not the only animal where the parasite is found. For example, Balantidium coli also has a high rate of incidence in rats.[12] In a Japanese study that analyzed the fecal samples in 56 mammalian species, Balantidium coli was found to be present not just in all the wild boars tested (with wild boars and pigs being considered the same species), it was also found in five species of non human primate: Chimpanzee (Pan troglodytes), White-handed gibbon (Hylobates lar), Squirrelmonkey (Saimiri sciurea), Sacred baboon (Comopithecus hamadryas), and Japanese macaque (Macaca fuscata).[13] In other studies, Balantidium coli was also found in species from the orders Rodentia and Carnivora.[13]