Bacterial tracheitis is a bacterial infection of the trachea.[1] Symptoms may include stridor, fever, productive cough, and pain.[2] Complications can include airway obstruction or tracheal stenosis.[2]

It may occur following croup or other viral upper respiratory infections.[2][3] Other risk factors include endotracheal intubation, tracheostomy, and poor immune function.[2][3] The bacterial most commonly involved include Staphylococcus aureus and streptococci.[3] Diagnosis is suspected based on symptoms and may be confirmed by bronchoscopy or X-rays.[3]

Treatment involves antibiotics and occasionally endotracheal intubation.[3] Antibiotics that may be used include ceftriaxone with vancomycin or amoxicillin/clavulanate.[2] Inhaled epinephrine is not useful.[2] While outcomes with treatment are generally good, people may still die as a result.[2]

Bacterial tracheitis is rare, affecting about 1 to 10 per million children per year.[3][2] It most commonly affects young children between the age of 3 and 8 years old.[2] Males may be more commonly affected than females.[2] It occurs more commonly in the fall and winter.[2] The condition was first described in the 1920s.[2]

Bacterial tracheitis is a bacterial infection of the trachea and is capable of producing airway obstruction. 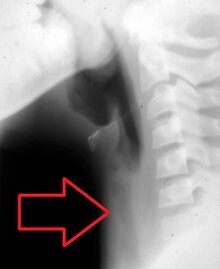 The diagnosis of tracheitis requires the direct vision of exudates or pseudomembranes on the trachea. X-ray findings may include subglottic narrowing. The priority is to secure the patient's airway, and to rule out croup and epiglottitis which may be fatal. Suspicion for tracheitis should be high in cases of onset of airway obstruction that do not respond to racemic epinephrine.

Although the trachea is considered part of the lower respiratory tract,[6] it is classified under "acute upper respiratory infections".[7]

In more severe cases, it is treated by administering intravenous antibiotics and may require admission to an intensive care unit (ICU) for intubation and supportive ventilation if the airway swelling is severe. During an intensive care admission, various methods of invasive and non-invasive monitoring may be required, which may include ECG monitoring, oxygen saturation, capnography and arterial blood pressure monitoring.