Atorvastatin, sold under the brand name Lipitor among others, is a statin medication used to prevent cardiovascular disease in those at high risk and treat abnormal lipid levels.[2] For the prevention of cardiovascular disease, statins are a first-line treatment.[2] It is taken by mouth.[2]

Common side effects include joint pain, diarrhea, heartburn, nausea, and muscle pains.[2] Serious side effects may include rhabdomyolysis, liver problems, and diabetes.[2] Use during pregnancy may harm the baby.[2] Like all statins, atorvastatin works by inhibiting HMG-CoA reductase, an enzyme found in the liver that plays a role in producing cholesterol.[2]

Atorvastatin was patented in 1986, and approved for medical use in the United States in 1996.[2][3] It is available as a generic medication and is relatively inexpensive.[2][4] In 2017, it was the second most commonly prescribed medication in the United States, with more than 104 million prescriptions.[5][6]

The primary uses of atorvastatin is for the treatment of dyslipidemia and the prevention of cardiovascular disease:[7]

Studies suggest that high-dose statin therapy may play a plaque-stabilizing role in people with acute coronary syndrome and thrombotic stroke.[23][24]

Some statins, including atorvastatin, may help prevent contrast-induced nephropathy in certain groups, such as those with pre-existing kidney impairment.[27][28][29][30] There is some evidence to suggest that high-dose statin provides greater benefit compared with regular-dose and low-dose statin in the prevention of contrast-induced acute kidney injury.[27][28]

Atorvastatin may be used in combination with bile acid sequestrants and ezetimibe to increase the reduction in cholesterol levels. However, it is not recommended to combine statin medication treatment with certain other cholesterol-lowering medications, particularly fibrates, because this may increase the risk of myopathy-related adverse effects.[15]

While many statin medications should be administered at bedtime for optimal effect, atorvastatin can be dosed at any time of day, as long as it is continually dosed once daily at the same time.[31][32]

The following have been shown to occur in 1–10% of people taking atorvastatin in clinical trials:

In 2014, the US Food and Drug Administration (FDA) reported memory loss, forgetfulness and confusion with all statin products including atorvastatin. The symptoms were not serious, and they were rare and reversible on cessation of treatment with the medication.[36]

A few cases of pancreatitis have been associated with atorvastatin.[45]

Interactions with clofibrate, fenofibrate, gemfibrozil, which are fibrates used in accessory therapy in many forms of hypercholesterolemia, usually in combination with statins, increase the risk of myopathy and rhabdomyolysis.[39][46][47]

Antacids can rarely decrease the plasma concentrations of statin medications, but do not affect the LDL-C-lowering efficacy.[51]

Niacin also is proved to increase the risk of myopathy or rhabdomyolysis.[35]

Some statins may also alter the concentrations of other medications, such as warfarin or digoxin, leading to alterations in effect or a requirement for clinical monitoring.[35] The increase in digoxin levels due to atorvastatin is a 1.2 fold elevation in the area under the curve (AUC), resulting in a minor drug-drug interaction. The American Heart Association states that the combination of digoxin and atorvastatin is reasonable.[52] In contrast to some other statins, atorvastatin does not interact with warfarin concentrations in a clinically meaningful way (similar to pitavastatin).[52]

A few cases of myopathy have been reported when atorvastatin is given with colchicine.[15]

As with other statins, atorvastatin is a competitive inhibitor of HMG-CoA reductase. Unlike most others, however, it is a completely synthetic compound. HMG-CoA reductase catalyzes the reduction of 3-hydroxy-3-methylglutaryl-coenzyme A (HMG-CoA) to mevalonate, which is the rate-limiting step in hepatic cholesterol biosynthesis. Inhibition of the enzyme decreases de novo cholesterol synthesis, increasing expression of low-density lipoprotein receptors (LDL receptors) on hepatocytes. This increases LDL uptake by the hepatocytes, decreasing the amount of LDL-cholesterol in the blood. Like other statins, atorvastatin also reduces blood levels of triglycerides and slightly increases levels of HDL-cholesterol.

In people with acute coronary syndrome, high-dose atorvastatin treatment may play a plaque-stabilizing role.[59][23] At high doses, statins have anti-inflammatory effects, incite reduction of the necrotic plaque core, and improve endothelial function, leading to plaque stabilization and, sometimes, plaque regression.[23][59] There is a similar thought process with using high-dose statins to prevent recurrence of thrombotic stroke.[24]

The liver is the primary site of action of atorvastatin, as this is the principal site of both cholesterol synthesis and LDL clearance. It is the dosage of atorvastatin, rather than systemic medication concentration, which correlates with extent of LDL-C reduction.[15] In a Cochrane systematic review the dose-related magnitude of atorvastatin on blood lipids was determined. Over the dose range of 10 to 80 mg/day total cholesterol was reduced by 27.0% to 37.9%, LDL cholesterol by 37.1% to 51.7% and triglycerides by 18.0% to 28.3%.[60]

Atorvastatin undergoes rapid absorption when taken orally, with an approximate time to maximum plasma concentration (Tmax) of 1–2 h. The absolute bioavailability of the medication is about 14%, but the systemic availability for HMG-CoA reductase activity is approximately 30%. Atorvastatin undergoes high intestinal clearance and first-pass metabolism, which is the main cause for the low systemic availability. Administration of atorvastatin with food produces a 25% reduction in Cmax (rate of absorption) and a 9% reduction in AUC (extent of absorption), although food does not affect the plasma LDL-C-lowering efficacy of atorvastatin. Evening dose administration is known to reduce the Cmax and AUC by 30% each. However, time of administration does not affect the plasma LDL-C-lowering efficacy of atorvastatin.

The mean volume of distribution of atorvastatin is approximately 381 L. It is highly protein bound (≥98%), and studies have shown it is likely secreted into human breastmilk.

Atorvastatin metabolism is primarily through cytochrome P450 3A4 hydroxylation to form active ortho- and parahydroxylated metabolites, as well as various beta-oxidation metabolites. The ortho- and parahydroxylated metabolites are responsible for 70% of systemic HMG-CoA reductase activity. The ortho-hydroxy metabolite undergoes further metabolism via glucuronidation. As a substrate for the CYP3A4 isozyme, it has shown susceptibility to inhibitors and inducers of CYP3A4 to produce increased or decreased plasma concentrations, respectively. This interaction was tested in vitro with concurrent administration of erythromycin, a known CYP3A4 isozyme inhibitor, which resulted in increased plasma concentrations of atorvastatin. It is also an inhibitor of cytochrome 3A4.

Atorvastatin is primarily eliminated via hepatic biliary excretion, with less than 2% recovered in the urine. Bile elimination follows hepatic and/or extrahepatic metabolism. There does not appear to be any entero-hepatic recirculation. Atorvastatin has an approximate elimination half-life of 14 hours. Noteworthy, the HMG-CoA reductase inhibitory activity appears to have a half-life of 20–30 hours, which is thought to be due to the active metabolites. Atorvastatin is also a substrate of the intestinal P-glycoprotein efflux transporter, which pumps the medication back into the intestinal lumen during medication absorption.[35]

Geriatric people (>65 years old) exhibit altered pharmacokinetics of atorvastatin compared to young adults, with mean AUC and Cmax values that are 40% and 30% higher, respectively. Additionally, healthy elderly people show a greater pharmacodynamic response to atorvastatin at any dose; therefore, this population may have lower effective doses.[15]

Several genetic polymorphisms may be linked to an increase in statin-related side effects with single nucleotide polymorphisms (SNPs) in the SLCO1B1 gene showing a 45 fold higher incidence of statin related myopathy[61] than patients without the polymorphism.

There are several studies showing genetic variants and variable response to atorvastatin,.[62][63] The polymorphisms that showed genome wide significance in Caucasian population were the SNPs in the apoE region; rs445925,[62] rs7412,[62][63] rs429358[63] and rs4420638[62] which showed variable LDL-c response depending on the genotype when treated with atorvastatin.[62][63] Another genetic variant that showed genome wide significance in Caucasians was the SNP rs10455872 in the LPA gene that lead to higher Lp(a) levels which cause an apparent lower LDL-c response to atorvastatin.[62] These studies were in Caucasian population, more research with a large cohort need to be conducted in different ethnicities to identify more polymorphisms that can affect atorvastatin pharmacokinetics and treatment response. [62]

Bruce Roth, who was hired by Warner-Lambert as a chemist in 1982, had synthesized an "experimental compound" codenamed CI 981 – later called atorvastatin.[64][65] It was first made in August 1985.[66][64][67][68][69] Warner-Lambert management was concerned that atorvastatin was a me-too version of rival Merck & Co.'s orphan drug lovastatin (brand name Mevacor). Mevacor, which was first marketed in 1987, was the industry's first statin and Merck's synthetic version – simvastatin – was in the advanced stages of development.[65] Nevertheless, Bruce Roth and his bosses, Roger Newton and Ronald Cresswell, in 1985, convinced company executives to move the compound into expensive clinical trials. Early results comparing atorvastatin to simvastatin demonstrated that atorvastatin appeared more potent and with fewer side effects.[65]

In 1994, the findings of a Merck-funded study were published in The Lancet concluding the efficacy of statins in lowering cholesterol proving for the first time not only that a "statin reduced 'bad' LDL cholesterol but also that it led to a sharp drop in fatal heart attacks among people with heart disease."[65][70]

Atorvastatin synthesis in commercial production (process) chemistry. The key step of establishing this medication's stereocenters, through initial use of an inexpensive natural product (chiral pool approach).

The first synthesis of atorvastatin at Parke-Davis that occurred during drug discovery was racemic followed by chiral chromatographic separation of the enantiomers. An early enantioselective route to atorvastatin made use of an ester chiral auxiliary to set the stereochemistry of the first of the two alcohol functional groups via a diastereoselective aldol reaction.[66][79]

Once the compound entered pre-clinical development, process chemistry developed a cost-effective and scalable synthesis.[66] In atorvastatin's case, a key element of the overall synthesis was ensuring stereochemical purity in the final drug substance, and hence establishing the first stereocenter became a key aspect of the overall design. The final commercial production of atorvastatin relied on a chiral pool approach, where the stereochemistry of the first alcohol functional group was carried into the synthesis—through the choice of isoascorbic acid, an inexpensive and easily sourced plant-derived natural product.[66][80] 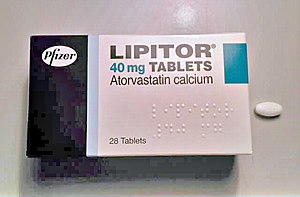 Atorvastatin calcium tablets are marketed by Pfizer under the trade name Lipitor[81] for oral administration. Tablets are white, elliptical, and film-coated. Pfizer also packages the medication in combination with other medications, such as atorvastatin/amlodipine.[82] Pfizer recommends that people do not break tablets in half to take half-doses, even when this is recommended by their doctors.[15]

Pfizer's U.S. patent on Lipitor expired on 30 November 2011.[83] Initially, generic atorvastatin was manufactured only by Watson Pharmaceuticals and India's Ranbaxy Laboratories. Prices for the generic version did not drop to the level of other generics—$10 or less for a month's supply—until other manufacturers began to supply the medication in May 2012.[84]

On 9 November 2012, Indian drugmaker Ranbaxy Laboratories Ltd. voluntarily recalled 10-, 20- and 40-mg doses of its generic version of atorvastatin in the United States.[88][89] The lots of atorvastatin, packaged in bottles of 90 and 500 tablets, were recalled due to possible contamination with very small glass particles similar to the size of a grain of sand (less than 1 mm in size). The FDA received no reports of injury from the contamination.[90] Ranbaxy also issued recalls of bottles of 10-milligram tablets in August 2012 and March 2014, due to concerns that the bottles might contain larger, 20-milligram tablets and thus cause potential dosing errors.[91][92]