Astigmatism is a type of refractive error in which the eye does not focus light evenly on the retina.[1] This results in distorted or blurred vision at any distance.[1] Other symptoms can include eyestrain, headaches, and trouble driving at night.[1] If it occurs in early life, it can later result in amblyopia.[2]

The cause of astigmatism is unclear, however it is believed to be partly related to genetic factors.[3][4] The underlying mechanism involves an irregular curvature of the cornea or abnormalities in the lens of the eye.[1][3] Diagnosis is by an eye examination.[1]

Three treatment options are available: glasses, contact lenses, and surgery.[1] Glasses are the simplest.[1] Contact lenses can provide a wider field of vision.[1] Refractive surgery permanently changes the shape of the eye.[1]

In Europe and Asia, astigmatism affects between 30 and 60% of adults.[4] People of all ages can be affected by astigmatism.[1] Astigmatism was first reported by Thomas Young in 1801.[3][5]

Although astigmatism may be asymptomatic, higher degrees of astigmatism may cause symptoms such as blurred vision, double vision, squinting, eye strain, fatigue, or headaches.[6] Some research has pointed to the link between astigmatism and higher prevalence of migraine headaches.[7]

The cause of astigmatism is unclear, however it is believed to be partly related to genetic factors.[3]

Genetics, based on twin studies, appear to play only a small role in astigmatism as of 2007.[8]

Genome-wide association study (GWAS) have been used to investigate the genetic foundation of astigmatism. Although no conclusive result has been shown, various candidates have been identified. In a study conducted in 2011 on various Asian populations, variants in the PDGFRA gene on chromosome 4q12 were identified to be associated with corneal astigmatism.[9] A follow-up study in 2013 on the European population, however, found no variant significantly associated with corneal astigmatism at the genome-wide level (single-nucleotide polymorphism rs7677751 at PDGFRA).[10] Facing the inconsistency, a study by Shah and colleagues in 2018 included both populations with Asian and Northern European ancestry. They successfully replicated the previously identified genome-wide significant locus for corneal astigmatism near the PDGFRA gene, with a further success of identifying three novel candidate genes: CLDN7, ACP2, and TNFAIP8L3.[11] Other GWAS studies also provided inconclusive results: Lopes and colleagues identified a susceptibility locus with lead single nucleotide polymorphism rs3771395 on chromosome 2p13.3 in the VAX2 gene (VAX2 plays an important role in the development of the dorsoventral axis of the eye);[12] Li and associates, however, found no consistent or strong genetic signals for refractive astigmatism while suggesting a possibility of widespread genetic co-susceptibility for spherical and astigmatic refractive errors. They also found that the TOX gene region previously identified for spherical equivalent refractive error was the second most strongly associated region.[13] Another recent follow-up study again had identified four novel loci for corneal astigmatism, with two also being novel loci for astigmatism: ZC3H11B (associated with axial length), NPLOC4 (associated with myopia), LINC00340 (associated with spherical equivalent refractive error) and HERC2 (associated with eye color).[11] 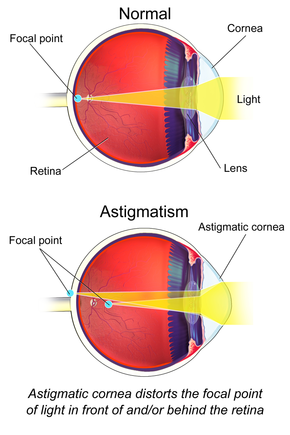 Axis of the principal meridian

In with-the-rule astigmatism, the eye has too much "plus" cylinder in the horizontal axis relative to the vertical axis (i.e., the eye is too "steep" along the vertical meridian relative to the horizontal meridian). Vertical beams of light focus in front (anterior) to horizontal beams of light, in the eye. This problem may be corrected using spectacles which have a "minus" cylinder placed on this horizontal axis. The effect of this will be that when a vertical beam of light in the distance travels towards the eye, the "minus" cylinder (which is placed with its axis lying horizontally – in line with the patient's excessively steep horizontal axis/vertical meridian) will cause this vertical beam of light to slightly "diverge", or "spread out vertically", before it reaches the eye. This compensates for the fact that the patient's eye converges light more powerfully in the vertical meridian than the horizontal meridian. Hopefully, after this, the eye will focus all light on the same location at the retina, and the patient's vision will be less blurred.[medical citation needed]

In against-the-rule astigmatism, a plus cylinder is added in the horizontal axis (or a minus cylinder in the vertical axis).[15]

Axis is always recorded as an angle in degrees, between 0 and 180 degrees in a counter-clockwise direction. Both 0 and 180 degrees lie on a horizontal line at the level of the center of the pupil, and as seen by an observer, 0 lies on the right of both the eyes.[medical citation needed]

Focus of the principal meridian

Astigmatism, whether it is regular or irregular, is caused by some combination of external (corneal surface) and internal (posterior corneal surface, human lens, fluids, retina, and eye-brain interface) optical properties. In some people, the external optics may have the greater influence, and in other people, the internal optics may predominate. Importantly, the axes and magnitudes of external and internal astigmatism do not necessarily coincide, but it is the combination of the two that by definition determines the overall optics of the eye. The overall optics of the eye are typically expressed by a person's refraction; the contribution of the external (anterior corneal) astigmatism is measured through the use of techniques such as keratometry and corneal topography. One method analyzes vectors for planning refractive surgery such that the surgery is apportioned optimally between both the refractive and topographic components.[18][19]

A number of tests are used during eye examinations to determine the presence of astigmatism and to quantify its amount and axis. A Snellen chart or other eye charts may initially reveal reduced visual acuity. A keratometer may be used to measure the curvature of the steepest and flattest meridians in the cornea's front surface.[20] Corneal topography may also be used to obtain a more accurate representation of the cornea's shape.[21] An autorefractor or retinoscopy may provide an objective estimate of the eye's refractive error and the use of Jackson cross cylinders in a phoropter or trial frame may be used to subjectively refine those measurements.[22][23][24] An alternative technique with the phoropter requires the use of a "clock dial" or "sunburst" chart to determine the astigmatic axis and power.[25][26] A keratometer may also be used to estimate astigmatism by finding the difference in power between the two primary meridians of the cornea. Javal's rule can then be used to compute the estimate of astigmatism.

A method of astigmatism analysis by Alpins may be used to determine both how much surgical change of the cornea is needed and after surgery to determine how close treatment was to the goal.[27]

Another rarely used refraction technique involves the use of a stenopaeic slit (a thin slit aperture) where the refraction is determined in specific meridians – this technique is particularly useful in cases where the patient has a high degree of astigmatism or in refracting patients with irregular astigmatism.

Astigmatism may be corrected with eyeglasses, contact lenses, or refractive surgery.[28] Glasses are the simplest and safest, although contact lenses can provide a wider field of vision. Refractive surgery can eliminate the need to wear corrective lenses altogether by permanently changing the shape of the eye but, like all elective surgery, comes with both greater risk and expense than the non-invasive options. Various considerations involving eye health, refractive status, and lifestyle determine whether one option may be better than another. In those with keratoconus, certain contact lenses often enable patients to achieve better visual acuity than eyeglasses. Once only available in a rigid, gas-permeable form, toric lenses are now also available as soft lenses.

According to an American study, nearly three in 10 children (28.4%) between the ages of five and 17 have astigmatism.[30] A Brazilian study published in 2005 found that 34% of the students in one city were astigmatic.[31] Regarding the prevalence in adults, a recent study in Bangladesh found that nearly 1 in 3 (32.4%) of those over the age of 30 had astigmatism.[32]

A Polish study published in 2005 revealed "with-the-rule astigmatism" may lead to the onset of myopia.[33]

A number of studies have found the prevalence of astigmatism increases with age.[34]

As a student, Thomas Young discovered that he had problems with one eye in 1793.[35] In the following years he did research on his vision problems.[36] He presented his findings in a Bakerian Lecture in 1801.[37]

Independent from Young, George Biddell Airy discovered the phenomenon of astigmatism on his own eye.[38] Airy presented his observations on his own eye in February 1825 at the Cambridge Philosophical Society.[39][40] Airy produced lenses to correct his vision problems by 1825,[38][41] while other sources put this into 1827[42] when Airy obtained cylindrical lenses from an optician from Ipswich.[43] The name for the condition was not given by Airy, but from William Whewell.[44][45][46]

By the 1860s astigmatism was a well established concept in ophthalmology,[47] and chapters in books described the discovery of astigmatism.[48][49]