Antiseptics (from Greek ἀντί anti, "against"[1] and σηπτικός sēptikos, "putrefactive"[2]) are antimicrobial substances that are applied to living tissue/skin to reduce the possibility of infection, sepsis, or putrefaction. Antiseptics are generally distinguished from antibiotics by the latter's ability to safely destroy bacteria within the body, and from disinfectants, which destroy microorganisms found on non-living objects.[3]

Some antiseptics are true germicides, capable of destroying microbes (bacteriocidal), while others are bacteriostatic and only prevent or inhibit their growth.[4]

Antibacterials include antiseptics that have the proven ability to act against bacteria. Microbicides which destroy virus particles are called viricides or antivirals. Antifungals, also known as antimycotics, are pharmaceutical fungicides used to treat and prevent mycosis (fungal infection). 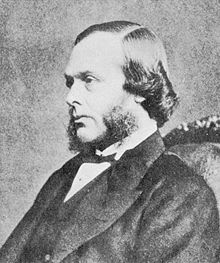 The widespread introduction of antiseptic surgical methods was initiated by the publishing of the paper Antiseptic Principle of the Practice of Surgery in 1867 by Joseph Lister, which was inspired by Louis Pasteur's germ theory of putrefaction.[5][6] In this paper, Lister advocated the use of carbolic acid (phenol) as a method of ensuring that any germs present were killed. Some of this work was anticipated by:

Structure of povidone-iodine complex, the most common antiseptic in use today.