Anencephaly is the absence of most of the brain and skull as a result of issues during early development.[2] Babies with the condition are blind, deaf, unconscious, and unable to feel pain.[1] Reflexes such as breathing and responses to sound or touch may be present.[1]

It is believed to result from a number of factors including folate deficiency, antiepileptic medication, diabetes, excessive vitamin A, and hyperthermia during pregnancy.[2] It is a type of neural tube defect.[2] The underlying mechanism involved failure of closure of the head end of the neural tube.[1] Diagnosis before birth may be suspected based on high levels of alpha fetoprotein in the mother and confirmed by ultrasound.[2]

Prevention is by supplementation of folic acid.[2] The anti epileptic medication, valproate should be avoided during pregnancy, if possible.[2] Treatment involves supportive care.[1] If the baby is born alive, most die within a few hours or days of birth.[1] About 1 in 7,500 births are affected in the United States.[3]

A baby born with anencephaly is usually blind, deaf, unaware of its surroundings and unable to feel pain. Although some individuals with anencephaly may be born with a main brain stem, the lack of a functioning cerebrum permanently rules out the possibility of ever gaining awareness of their surroundings. Reflex actions such as breathing and responses to sound or touch may occur.[4]

Due to the presence of the brainstem, children with anencephaly have almost all the primitive reflexes of a newborn, responding to auditory, vestibular and painful stimuli.[5] This means that the child can move, smile, suckle and breathe without the aid of devices.[6] 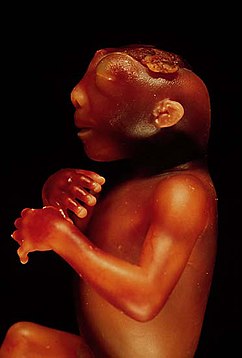 A side view of an anencephalic fetus

A front view of an anencephalic fetus

An infant with anencephaly and acrania

The cause of anencephaly is disputed by medical professionals and researchers.

Until recently, medical literature did not indicate a connection among many genetic disorders, both genetic syndromes and genetic diseases, that are now being found to be related. As a result of new genetic research, some of these are, in fact, highly related in their root cause despite the widely varying set of medical symptoms that are clinically visible in the disorders. Anencephaly is one such disease, part of an emerging class of diseases called ciliopathies. The underlying cause may be a dysfunctional molecular mechanism in the primary cilia structures of the cell, organelles present in many cellular types throughout the human body. The cilia defects adversely affect "numerous critical developmental signaling pathways" essential to cellular development and, thus, offer a plausible hypothesis for the often multi-symptom nature of a large set of syndromes and diseases. Known ciliopathies include primary ciliary dyskinesia, Bardet–Biedl syndrome, polycystic kidney and liver disease, nephronophthisis, Alström syndrome, Meckel–Gruber syndrome, and some forms of retinal degeneration.[15] 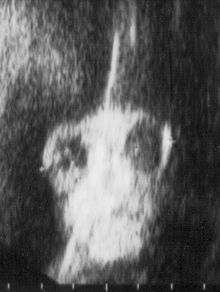 Ultrasound image of fetus with anencephaly.

X-ray of an anencephalic stillborn fetus

Anencephaly can often be diagnosed before birth through an ultrasound examination. The maternal serum alpha-fetoprotein (AFP screening)[16] and detailed fetal ultrasound[17] can be useful for screening for neural tube defects such as spina bifida or anencephaly.

The most common type of anencephaly, where the brain has entirely failed to form, except for the brain stem. Infants rarely survive more than one day after birth with holoanencephaly.[18]

The most severe type of anencephaly where area cerebrovasculosa and area medullovasculosa fill both cranial defects and the spinal column. Craniorachischisis is characterized by anencephaly accompanied by bony defects in the spine and the exposure of neural tissue as the vault of the skull fails to form.[18][19] Craniorachischisis occurs in about 1 of every 1000 live births, but various physical and chemical tests can detect neural tube closure during early pregnancy.[20]

There is no cure or standard treatment for anencephaly. Prognosis is extremely poor, as many anencephalic fetuses do not survive birth and infants that are not stillborn will usually die within a few hours or days after birth from cardiorespiratory arrest.[4]

In almost all cases, anencephalic infants are not aggressively resuscitated because there is no chance of the infants ever achieving a conscious existence. Instead, the usual clinical practice is to offer hydration, nutrition, and comfort measures and to "let nature take its course". Artificial ventilation, surgery (to fix any co-existing congenital defects), and drug therapy (such as antibiotics) are usually regarded as futile efforts. Some clinicians and medical ethicists view even the provision of nutrition and hydration as medically futile.[citation needed]

Research has suggested that, overall, female babies are more likely to be affected by the disorder.[23]

One issue concerning anencephalic newborns is organ donation. Initial legal guidance came from the case of Baby Theresa in 1992, in which the boundaries of organ donation were tested for the first time.[24] Infant organs are scarce, and the high demand for pediatric organ transplants poses a major public health issue. In 1999, it was found that among children who die under the age of two, 30–50% do so while awaiting transplant.[24] In order for infant organs to be viable and used for transplant, they must be removed while the infant still has circulation or very soon after circulation has ceased. However, this poses both legal and ethical issues. In the United States, all states have laws that forbid the removal of organs from a donor until after the donor has died, except in the case of altruistic living donations of a kidney or liver segment.

The goal of those in support of organ donation is that it will further contribute to the pool of suitable organs for transplants while the need for lifesaving organ transplants is so great. It has been estimated that 400–500 infant hearts and kidneys and 500–1,000 infant livers are needed in the United States each year.[25] Because anencephalic neonates have partially functioning brain stems, they possess some brain stem reflexes such as spontaneous respirations. For this reason, these patients cannot be declared brain dead.

Within the medical community, the main ethical issues with organ donation are a misdiagnosis of anencephaly, the slippery slope argument, that anencephalic neonates would rarely be a source of organs, and that it would undermine confidence in organ transplantation.[26] Slippery slope concerns are a major issue in personhood debates, across the board. In regards to anencephaly, those who oppose organ donation argue that it could open the door for involuntary organ donors such as an elderly person with severe dementia. Another point of contention is the number of children who would actually benefit. There are discrepancies in statistics; however, it is known that most anencephalic children are stillborn.[26]

Proposals have been made to bypass the legal and ethical issues surrounding organ donation. These include waiting for death to occur before procuring organs, expanding the definition of death, creating a special legal category for anencephalic infants, and defining them as non-persons.[27]

In the United Kingdom, a child born with anencephaly was reported as the country's youngest organ donor. Teddy Houlston was diagnosed as anencephalic at 12 weeks of gestation. His parents, Jess Evans and Mike Houlston, decided against abortion and instead proposed organ donation. Teddy was born on 22 April 2014, in Cardiff, Wales, and lived for 100 minutes, after which his heart and kidneys were removed. His kidneys were later transplanted into an adult in Leeds. Teddy's twin, Noah, was born healthy.[28]

Neocortical death, similar to a persistent vegetative state (PVS), involves loss of cognitive functioning of the brain. A proposal by law professor David Randolph Smith,[29] in an attempt to prove that neocortical death should legally be treated the same as brain death, involved PET scans to determine the similarities. However, this proposal has been criticized on the basis that confirming neocortical death by PET scan may risk indeterminacy.[30]

Anencephaly can be diagnosed before delivery with a high degree of accuracy. Although anencephaly is a fatal condition, the option of abortion is dependent on the abortion laws in the state.[25] According to a 2013 report, 26% of the world's population reside in a country where abortion is generally prohibited.[25] [31] In 2012, Brazil extended the right of abortion to mothers with anencephalic fetuses. This decision is, however, receiving much disapproval by several religious groups.[32]

The case of baby Theresa was the beginning of the ethical debate over anencephalic infant organ donation.[24] The story of baby Theresa remains a focus of basic moral philosophy. Baby Theresa was born with anencephaly in 1992. Her parents, knowing that their child was going to die, requested that her organs be given for transplantation. Although her physicians agreed, Florida law prohibited the infant's organs from being removed while she was still alive. By the time she died nine days after birth, her organs had deteriorated past the point of being viable.[33]

Baby K was an anencephalic infant that was kept alive for two years and 174 days under intensive care by order of the US Court of Appeals for the Fourth Circuit.

The Uniform Determination of Death Act (UDDA) is a model bill, adopted by many US states, stating that an individual who has sustained either 1) irreversible cessation of circulatory and respiratory functions or 2) irreversible cessation of all functions of the entire brain, including the brain stem, is dead. This bill was a result of much debate over the definition of death and is applicable to the debate over anencephaly. A related bill, the Uniform Anatomical Gift Act (UAGA), grants individuals and, after death, their family members the right to decide whether or not to donate organs. Because it is against the law for any person to pay money for an organ, the person in need of an organ transplant must rely on a volunteer.[25]

Some genetic research has been conducted to determine the causes of anencephaly. It has been found that cartilage homeoprotein (CART1) is selectively expressed in chondrocytes (cartilage cells). The CART1 gene to chromosome 12q21.3–q22 has been mapped. Also, it has been found that mice homozygous for deficiency in the Cart1 gene manifested acrania and meroanencephaly, and prenatal treatment with folic acid will suppress acrania and meroanencephaly in the Cart1-deficient mutants.[35][36]