Abdominal thrusts, also known as the Heimlich maneuver, is a treatment for severe choking (foreign body airway obstruction).[1] Specifically it is used in those over the age of 1 who are unable to cough but remain conscious.[3] It is not recommended in those under 1 year old or who are pregnant.[2] In those under 1 back slaps and chest thrusts are recommended, while in those who are pregnant chest thrusts are used.[3][1]

The rescuer should start standing behind the person.[2] They should than wrap their arms around the person's waist and bend them forwards.[1][2] This is followed by clenching one hand into a fist, just above the belly button, and using the other hand and arms to pull the fist inward and upwards.[2] This final movement may be repeated 5 to 10 times.[1][2] For a child a person may need to kneel.[1]

Complications may include injury to the ribs, liver, stomach or spleen injury.[1] It is possible that vomiting may also occur.[1] If the person becomes unconscious cardiopulmonary resuscitation (CPR) should be started.[1] Henry Heimlich, an American surgeon, is credited with the procedures creation in 1974.[4]

Abdominal thrusts are a treatment for severe choking (foreign body airway obstruction).[1] Specifically it is used in those over the age of 1 who are unable to cough but remain conscious.[3]

A universal sign of choking in someone who is unable to talk consists of placing both hands on one's own throat while trying to attract the attention of others who might assist.[6]

The procedure should not be done on those under 1 year old or who are pregnant.[2] 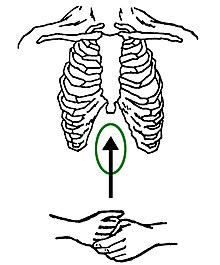 Point of applying of the abdominal thrusts (between chest and belly button). The hands press in the in-and-up direction.

Abdominal thrusts on a standing person

Abdominal thrusts on a person lying down

The pressure amounts to an artificially induced cough. To assist a larger person, more force may be needed. The Mayo Clinic recommends the same placement of fist and hand and upward thrusts as if you are trying to lift the person.

It is possible for still-conscious people to perform the procedure on themselves, without assistance.[8]

If the person choking should not receive pressures on the abdomen (for example, in case of pregnancy or excessive obesity), chest thrusts are advised instead.[11] These are applied on the lower half of the chest, but not in the very endpoint (which is the xiphoid process). In contrast to the prevailing American and European advice, the Australian Resuscitation Council recommends chest thrusts instead of abdominal thrusts.[12]

If the person choking is not upright, the US National Institutes of Health (NIH) recommends positioning the person on their back, then straddling the torso and using chest thrusts.[13]

Due to the forceful nature of the procedure, even when done correctly, abdominal thrusts can injure the person on whom it is performed. Bruising to the abdomen is highly likely and more serious injuries can occur, including fracture of the xiphoid process or ribs.[14] Anyone who has been subjected to abdominal thrusts should seek a medical examination afterwards.[15]

Jewish-American thoracic surgeon and medical researcher Henry Heimlich, noted for promulgating abdominal thrusts, claimed that back slaps were proven to cause death by lodging foreign objects into the windpipe.[16] The 1982 Yale study by Day, DuBois, and Crelin that persuaded the American Heart Association to stop recommending back blows for dealing with choking was partially funded by Heimlich's own foundation.[17] According to Roger White MD of the Mayo Clinic and American Heart Association (AHA), "There was never any science here. Heimlich overpowered science all along the way with his slick tactics and intimidation, and everyone, including us at the AHA, caved in."[18]

From 1985 to 2005, abdominal thrusts were the only recommended treatment for choking in the published guidelines of the American Heart Association and the American Red Cross. In 2006, both organizations changed course and "downgraded" the use of the technique. For conscious people, the new guidelines recommend first encouraging coughing and than potentially applying back slaps; if this method failed to remove the airway obstruction, rescuers were to then apply abdominal thrusts. For unconscious people, the guidelines recommend chest thrusts.

Henry Heimlich also promoted abdominal thrusts as a treatment for drowning[19] and asthma attacks.[20] The Red Cross now contests those claims. The Heimlich Institute has stopped advocating on their website for the Heimlich maneuver to be used as a first aid measure for drowning victims. His son, Peter M. Heimlich, alleges that in August 1974 his father published the first of a series of fraudulent case reports in order to promote the use of abdominal thrusts for near-drowning rescue.[21][22] The 2005 drowning rescue guidelines of the American Heart Association[23] did not include citations of Heimlich's work, and warned against the use of the Heimlich maneuver for drowning rescue as unproven and dangerous, due to its risk of vomiting leading to aspiration.[23]