Abametapir, sold under the brand name Xeglyze, is a medication used to treat head lice infestation.[1] It can be used in people at least six months old.[1] It is applied to the hair and scalp.[1]

Common side effects include skin redness, rash, burning, vomiting, eye irritation, itching, and hair color changes.[1] If swallowed, it can result in benzyl alcohol toxicity.[1] While there is no evidence of harm in pregnancy, such use has not been well studied.[1] It is a metalloproteinase inhibitor.[1]

Abametapir is indicated for the topical treatment of head lice infestation in people six months of age and older.[2][5]

It is applied as a single treatment.[4]

Abametapir has no contraindications according to the labeling.[6]

Abametapir blocks the liver enzymes CYP3A4, CYP2B6 and CYP1A2 in vitro. A single application of the drug may lead to increased blood concentrations of drugs that are metabolized by these enzymes.[2]

The drug inhibits enzymes called metalloproteinases. In lice, these enzymes play a role in egg development and survival;[2] and consequently, blocking them will disrupt the lice's life cycle.

After application to the scalp, part of the substance reaches the bloodstream, where most of it (91.3–92.3%) is bound to plasma proteins. It is metabolized primarily by the liver enzyme CYP1A2 to abametapir hydroxyl and further to abametapir carboxyl (see structure drawings). Abametapir carboxyl has a plasma protein binding of 96.0–97.5% and is the predominant of the three substances in the circulation, having a Cmax 30 times and an area under the curve (AUC) 250 times that of abametapir itself.[2]

The elimination half-life of abametapir is 21 hours. That of abametapir carboxyl is not well known; it is thought to be 71±40 hours or longer. It is not known whether the drug is eliminated via the urine or the faeces.[2] 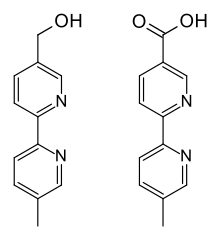 The U.S. Food and Drug Administration (FDA) approved abametapir based on evidence from two identical clinical trials of 699 participants with head lice.[5] The trials were conducted at fourteen sites in the United States.[5]

The benefit and side effects of abametapir were evaluated in two clinical trials that enrolled participants with head lice who were at least six months old.[5]

About half of all enrolled participants was randomly assigned to abametapir and the other half to placebo.[5] Abametapir lotion or placebo lotion were applied once as a ten-minute treatment to infested hair.[5] The benefit of abametapir in comparison to placebo was assessed after 1, 7 and 14 days by comparing the counts of participants in each group who were free of live lice.[5] The U.S. Food and Drug Administration (FDA) considers it to be a first-in-class medication.[7]