Internet-in-a-Box (IIAB) is an effort to provide en:Wikipedia and other content via physical media. It is primarily for distribution in places where access to the Internet is limited or controlled. The device includes software which creates a Wi-Fi hotspot that offers closed platform access.

In practice, this means that up to 32 users who are within a couple of hundred meters of the hotspot can connect to the device and access or download the content that exists on the device: Wikipedia slices, medical knowledge, videos and books. IIAB is not intended to further connect users to the Internet or to content, beyond what is presented in the Box itself.

⇒ How to buy one

⇒ How to build one

⇒ How to work it

Internet-in-a-Box is a collaborative and volunteer managed project. What we provide for free is the underlying software, content, and assembly of the devices. Those who wish a device are generally expected to cover the costs of the underlying hardware. We also encourage people to make the devices themselves, including encouraging people to make and sell the devices on to others. All the hardware is avaliable "off the shelf" and we have 3D files for printing the cases.

As of 2017, the Raspberry Pi hardware is being used.

The devices run Raspbian. It functions as a en:webserver.

The Internet-in-a-Box project collaborates well with activist communities in the following spaces: 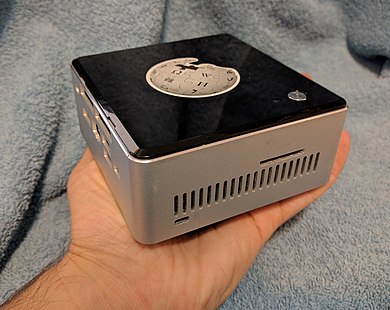 An older version of offline Wikimedia content and a WiFi transmitter.

The term "Internet in a Box", in the sense of a curated collection of offline web content, was coined by Braddock Gaskill in circa 2012 as the name of an organization and project, a name he later registered as a trademark. Braddock's vision was to aggregate the most used and most important internet content from an educational point of view into an inexpensive server from which it could be accessed over a local network with no connection to the wider internet. This offering was aimed principally a schools. He distributed such a device for some time and also made available a portable hard disk drive with just the content, which included the Wikipedia in 40 languages, Khan Academy videos, en:Open Street Maps, 40,000 en:Project Gutenberg files, and other items.

The project was successful, and Braddock allowed others to take it over, principally a group of volunteers working on XSCE, a server that grew out of the the One Laptop Per Child project. OLPC's focus was laptops, but it also offered server software branded XS. Over time XS Community Edition adopted the name Internet in a Box and extended it to more platforms and normalized some of the content, especially shifting the Wikipedia and other Wikimedia content to use the Kiwix server.

Wikipedia was established in 2001.

Since 2002 it has been possible to download the entirety of Wikipedia following instructions at en:Database download and elsewhere. It has always been a priority to encourage the download of Wikimedia content for mirroring, republishing, and remixing elsewhere.

In 2003, volunteers organized to curate Wikimedia content to be available for offline viewing. Wikipedia:Version 1.0 Editorial Team was established to curate content for distribution on CDs. In 2004 Wikimedia Deutschland offered CD 2004, a distribution of Wikipedia and Kiwix on CD. The project as originally imagined probably reached its peak of active development in 2008 and ended with its last major update in 2011. Although distribution on CDs is not remembered as having lasting impact, Wikipedia 1.0 project was influential in establishing community customs which remain in Wikimedia projects. Those customs include using WikiProjects for community organization, ranking articles by importance, grading content for quality, and rallying volunteers to discuss as a community the prioritization content development. In 2006, another project tried to distribute Wikipedia on CDs.

Since 2006 a software project called Kiwix has been in development for making offline copies of Wikipedia easy for people to use. Although Wikimedia content is technically available for download, without an easy to use reader, typical people cannot use offline information in the same way as they browse the online content. Kiwix has been the market leader in offline browsing products.

Between 2006 and 2010-2013, the One Laptop Per Child project developed hardware and software to produce laptop computers for educational use, at a price point of around USD $200. 2.4M laptops were distributed: primarily to rural and suburban parts of Rwanda, Peru, and Uruguay. A smaller % of the project reached another 30 countries. OLPC also produced the en:Sugar Desktop environment, which could be run on Linux and later Android operating systems. Each of those laptops and OS images (more about os images) came with some Wikimedia content: mainly Wikipedia snapshots in a few languages. The project is active today as spin-off groups of voluneer developers and curators, pursuing parts of the initial concept.

In 2009 the WikiReader project sought to produce a low cost device that would present the text of Wikipedia. The device was manufactured and sold. The source of the software is available online. In 2014 they stopped production.

In 2014 Wikimedia users in India sought to establish Wikipedia:WikiConnect, a project to provide offline access to Wikipedia content in rural India.

IIAB in use in a refugee camp in Bangladesh

Cuba: A needs assessment was made in 2016, by medical students at Columbia University.

Peru A needs assessment in Peru started in 2017.

Greece (Syrian refugee camp) In later half of 2017. One device has been left in the country.

Jordan In later half of 2017. Two devices has been left in the country.

Ghana A couple of IIABs have been set up at a nursing school in Ghana.[1]

Bangladesh In January 2018 a device was taken to Bangladesh to aid providers working with Rohingya refugees.

India In 2018 Digital Empowerment Foundation added IIAB to two of their hub centers in Haryana and Tamil Nadu. In 2019 Rotary brought 50 units to distribute to their projects in Northern India.

East Timor In 2018 Xanana Gusmao Reading Room added an IIAB to their library. "They noted that the Spanish Medical Wikipedia on this current distribution allows for not just browsing while close to the wifi, but also downloading the APK which installs on an Android phone giving you a take away version. So they plan to encourage all the undergraduate medical students who visit their library to install their own copy of Spanish Medical Wikipedia on their phones."

Mauritius in August 2018 IIAB demonstrated to delegates and visitors at 11th World Hindi Conference, Port Louis. The conference consists of several Hindi scholars, writers, and laureates from different parts of the world to contribute the language. This year Hindi Wikipedia participated in the conference as an exhibitor. 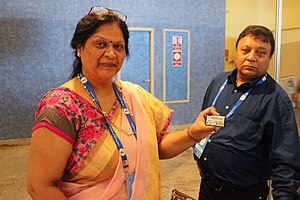